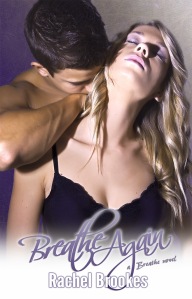 For Savannah Rae, the thought of living in her picture-perfect world was almost too much to comprehend. With her dream job, a family she could finally call her own, and the beginnings of the best chapter of her life, she still couldn’t shake the unnerving feeling that it was all too good to be true.

The thought of a life without Savannah was incomprehensible to Tate Connors. Never in his wildest dreams did he think he would find his girl in the form of a sassy, stubborn, beautiful Australian. Finally he had the girl and life he so desperately wanted, but he still couldn’t ignore the fear that it would crash around him.When Tate’s past becomes his present and Savannah’s present becomes her past, the possibility of a future together collides head-on with reality. In her darkest days, the words Just Breathe provided a peaceful comfort to Savannah from the heavens above. Now as she and Tate go down the path of new beginnings, brutal endings, and the constant craving of a happily ever after, they are anxious to learn how to Breathe Again.

This is the third and final instalment in the Breathe series and it is the perfect ending to Tate and Sav’s story. Along with their relationship growing from book to book, Rachel’s writing has also gone from strength to strength too. Since book one, Rachel has grown as an author and each book captivates into the lives of not just Tate and Sav, but all the characters along the way too. She has a way with her writing that drags you in and you keep turning the pages until you have read the last sentence and think “what do I do now?”

We have been through thick and thin with Tate and Sav. We have watched them face their pasts, their demons. Watched them grow together and separately throughout the series and we watch all the drama unfold only to be put back together again and overcome with the happy ending that they both deserve.

There are certain parts of the book which had me shaking my head at and although I want to write about them, I’m not going to as they are kinda spoilery. I will say that both Sav and Tate were in the wrong, and if they both just pulled their heads out of their ass then none of the problems would have happened in the first place. It was stupid and the solution to this was pretty damn simple in my eyes. If that had happened to me, I would have dropped everything and gone (You’ll understand when you read it/if you have already read it) and then none of the shit would have been happening. But then it is Tate and Sav and they always do things the hard way.

Sav is still the spunky, fiery women we all know and love, but we also know just how deeply in love she is with Tate. There relationship has its up and downs but you know that whatever happens they will find their way back to one another soon or later. With that ending with Breathless, I was with baited breath as to what was going to happen in Breathe Again. Sav is a stubborn mule and we all know she has flick you off with a finger and ignore you. But then Sav and Tate were never drama free and you expect something from them. But then you see their relationship flourish and you see them happier than ever, finally putting all the shit behind them. I loved a happy Sav – she has grown up so much over the course of the book, it was nice for her to find love, to have this family and people she could rely on.

But as I’ve said, drama follows closely and you see insecurities, her fears and her fear of her past being relived. It tore your heart to watch this from Sav (and the same for Tate too!). It is a difficult journey but one you know she has to take to get where she does at the end. Everything she has been through only makes her stronger and it was the prefect conclusion to this series.

After the ending of Breathless, you completely feel for Tate. And if we know anything about Tate we know he’s stubborn but also determined. He will do whatever he can to win back Sav but we also know Sav is stubborn too and this makes it difficult on both of them. But then I loved that it wasn’t all ‘I forgive you’, Sav made him grovel and in the end she couldn’t resist anymore. It makes it more real.

We see Tate so happy but then his past is still haunting him, especially his father and we see that take over him, make him insecure, angry, hurt but with Sav he can get through it all. He is still the sexy, arrogant, dirty talking guy we all love, but we know there are many layers to him and we see all of them at some stage. As I’ve said, all is happy and then we hit part two and everything they have fought for comes crashing down. We see Tate depressed, annoyed, angry and hurt. We see him over-thinking things, questioning himself and Sav and you just want them to get it straight. To communicate and as I’ve said, this is the part which annoyed the hell out of me. It was a simple solution as to what to do, yet neither of them did. Tate could have easier left and go Sav but he didn’t. I didn’t really understand him when Sav came back but I suppose that is Tate and he’s been hurting and confused.

But when they do get their shit together, Tate is getting over the past, and we see him gleaming, so much happier and stronger and you know that he and Sav are the real deal and they can finally breathe again together – as a family!

I have thoroughly enjoyed every book in this series, enjoyed watching everyone grow up, bond and have such a special love for on another. To see the end of this story is pretty damn sad but I am loving the fact that Blake is going to get his own book. I love that guy! Let’s hope Rachel will decide to write one for Mr. Davenport 😉 YUMMMMMM.