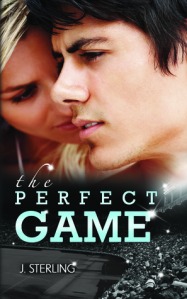 He’s a game she never intended to play.
And she’s the game changer he never knew he needed.

The Perfect Game tells the story of college juniors, Cassie Andrews & Jack Carter. When Cassie meets rising baseball hopeful Jack, she is determined to steer clear of him and his typical cocky attitude. But Jack has other things on his mind… like getting Cassie to give him the time of day.

They’re both damaged, filled with mistrust and guarded before they find one another (and themselves) in this emotional journey about love and forgiveness. Strap yourselves for a ride that will not only break your heart, but put it back together.

Sometimes life gets ugly before it gets beautiful…

“You’re both so screwed up alone that together you’re like the perfect mess.”

I’m going to be honest with you. I’ve had The Perfect Game on my kindle for a few weeks now, and every time I have gone to read it, I have been scared and chosen another book. The reason? When I download books, I read reviews, as do many other people, but I read one review that said something really bad happens and if you follow me on twitter or have read some of my reviews, you know I become too emotionally attached to books, the storylines and the characters, and I knew, if I read this book, I’d probably have my heart ripped out and throw my kindle away from me. And that is exactly what I did reading this book. But it was worth every second because I fell head over heels in love with this book from the beginning.

College junior Cassie Andrews and her best friend and roommate Melissa end up going to a frat party and that is when Cassie and Jack meet. Jack is your typical manwhore who gets any women he wants until he meets Cassie who is turned off by his charms and won’t give him the time of day. Jack’s cocky and always gets what he wants but when Cassie bites back, something switches in him and he pursues her until she relentlessly gives in to a date with him. Only one date though, and then he’ll leave her alone. But things aren’t always that easy when it comes to Jack when she gets to know him, the real him over dinner and that’s when everything changes for the both of them.

You find out that Jack isn’t all that cocky and deep down he’s been burnt badly by his parents leaving him and his brother when they were younger and that he has major trust issues, hence why he only sleeps with a girl once and lets them pursue him. He’s way out of his comfort zone with Cassie, but he knows there is something different about him than all the other girls. She doesn’t care that he’s an athlete, she only cares about him as a person and that’s when he knows he wants something more with her. She asks him to prove it, and that’s exactly what he does. Proves he can be a one women man, especially for Cassie.

Their relationship started off great, apart from the group of girls constantly making snide comments about Cassie. Things are perfect for them but they both have major trust issues especially Cassie. Her issues stem from her Dad who never follows through with his promises and so because of this, Cassie finds it hard to trust any man. Jack’s issues are from his parents leaving and the fact he’s never been in a relationship so he keeps telling Cassie he will screw up eventually. But together, they both refuse to let anyone get in-between them; they are determined to make this relationship work.

To see Jack change for Cassie was beautiful. She’s the one girl who sees Jack for who he really is and not the cocky, manwhore that everyone else sees. He’s real with her and it seemed that he needed Cassie as much as she needed him. As their relationship blossoms and they have been through a lot to get through to the other side, Jack has been drafted for his Baseball and is travelling and Cassie is doing well in college and has earned herself a photography internship. Things are going great but as any great book, nothing good ever lasts too long and things change dramatically over night between them when they are apart.

I screamed, shouted and threw my kindle away from me while I took in what I had just read. Then when I got my breathing back to normal and read the next page few pages, I did it all over again. To say I was affected was an understatement. I just couldn’t believe what I had read. It made me hate Jack for what he had done to Cassie after telling her he would never hurt her. I couldn’t condone what he had done, but then I felt remorse towards him. He felt so sorry and guilt was eating him up that he knew the right thing was to own up to Cassie about it, even though he knew he would lose her and that’s what he never wanted to do – she was his life. Then the way he handled it, going to the extreme of what he did, even when everyone was telling him not to, it got me frustrated and angry at him again. I know he wanted to make things right, but to do that? There was really no need, but in a way I could see his reasoning’s but it was definitely the wrong way to go as it backfired on him.

I am really glad that you get to see Jack’s POV in certain chapters. If we didn’t, I would have definitely hated him throughout the book, wondering if it was a bet or something to try and be with Cassie but alas, don’t worry, it’s not and he truly does want Cassie forever, which I thought was amazingly sweet.

This book goes through a journey. A journey of love, changes, breaking down barriers, heartbreak and friendship. There is a happy ending for both Jack and Cassie and after everything that they went through; the way he apologized would clinch at my heartstrings too. The ending was positively perfect in my opinion and although after everything that happens between the pair and many would probably not forgive him; it seemed the right choice for Cassie to do so. I, for one, am so excited to read book two The Game Changer, when it is out in 2013. Please hurry up and release it J.Sterling!!