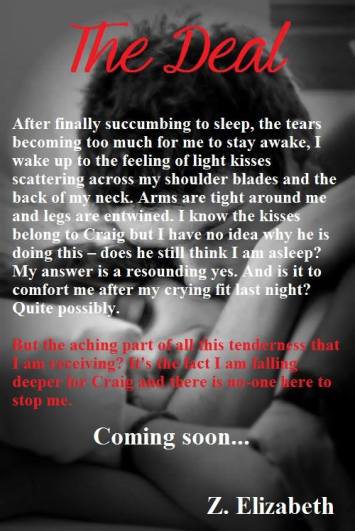 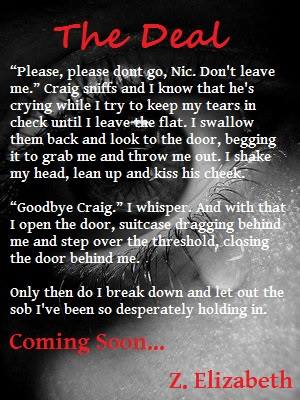 Anna Bloom has an exclusive scene from The Deal on her blog too.

For those who follow The Book Lovers, or Z. Elizabeth as I am now formally known as, I have been talking about my book – THE DEAL – for a while now. And as you can see above, teasers too.

I plan to release it on DECEMBER 1st mainly so I have a few months to clean it up, learn how to format and all that jazz. It does have a pretty cool Christmas scene so I can justify putting it out this month HAHA.

I’ve had this book in the making since I was 15 years old – eight years ago. It started as McFly fanfiction LOL, but it was the first ‘book’ that I actually finished. It was over 100 pages and I had actually started a sequel to it. I only wrote 20 pages before forgetting about either. Then about a year and a half ago I stumbled upon a hidden folder on my laptop and low and behold a load of documents with half written stories in.

Here are a few details about The Deal:

Here is the synopsis for you:

One feud.
Two families.
One secret.

What happens when you fall for the enemy?

Thanks to their fathers’ feud, Nicole and Craig have been enemies since the moment they were born. But six years ago they fell in love… They just never told each other.

Motivated by their grandparents’ money, they agree to a simple deal: Stay married for a year and unravel the secrets and lies surrounding their fathers. Bound together, they must figure out why the two former best friends have spent the last thirty years ignoring one another and prohibited any contact between Nicole and Craig.

Craig is more than happy to uncover their fathers’ past if it means he gets Nicole for real.
Nicole wants to keep the past exactly where it is and she will fight Craig every step of the way.
With only limited time together, delving into their family history could be the mistake that will break both their hearts.

What happens when secrets and lies are revealed? Can Nicole and Craig live their Happily Ever After after waiting six long years to be together? Or will one secret be enough to break them apart, just like their fathers?

Here is a little teaser of The Deal, just for you – obviously its unedited and subject to change.

Let me know what you think 😀 It’s in Craig’s POV.

“Open your eyes Nic and keep them open. I want to watch you break apart when you come.” I order her, roughly kissing her whilst trying to keep the pace I’ve established. “Touch yourself.”

I feel her clench at my commanding tone and I nearly shoot my load inside of her. I dont think she has ever done that but she has me in a fucking vice. She knows what she did, the sneaky bitch, as she is grinning up at me. She still isnt touching herself and i’m not sure how long I can last. I want her to come with me.

“Touch yourself. Now. I won’t ask again Nic.” I say, clenching my teeth together when I watch her hand slide down her body and touch that beautiful bud that makes her scream my name.

“Oh fuck Craig.” She mutters, her finger moving over her clit at lightening speed. I know she’s close, her pussy muscles are clutching me yet again. I dont have much longer before I mark her and by the sounds of it, she doesnt either. She’s got her eyes closed, she’s biting her lip hard and her finger is rubbing rapidly; hips thrusting manically against my cock.

“Open your God damn eyes and fucking come now Nic.” I growl at her and she blinks them open in a hurry, her eyes burning into mine. I push myself in two, three more times before I come inside her. With the first lot of spurts, Nic swallows and begins to convulse around me, screaming my name as she comes apart and I can feel her pussy gripping me, her juices washing over me and dripping out of her – she milks me for everything I have and more.

I slowly move in and out to get over the aftershock and then I let go of the headboard and collapse on top of her. I’m sweating, out of breath and freaking sated. I kiss between Nic’s breasts, licking up the sweat that has accumulated there and roll onto my side, slipping out of her before bundling her into my arms. She has a content smile on her face as she looks up at me and I feel like the shit knowing I put that there.

One thought on “My Book: The Deal”