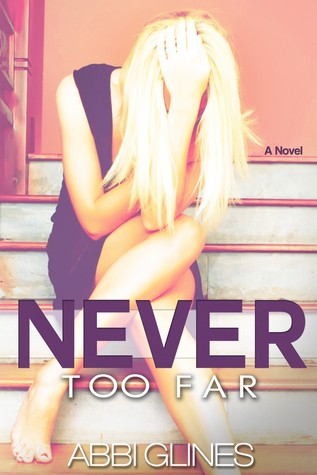 He had held a secret that destroyed her world.

Everything she had known was no longer true.

Blaire couldn’t stop loving him but she knew she could never forgive him.
Now, she was back home and learning to live again. Moving on with life… until something happened to send her world spinning once again.
What do you do when the one person you can never trust again is the one that you need to trust so desperately?

You lie, hide, avoid, and pray that your sins never find you out.

If you have yet to read Fallen Too Far, check out my review of it here, before you read Never Too Far.

Never Too Far starts off from where Fallen Too Far ends.

Its three weeks later and Blaire is in Sumit, living with Cain’s grandmother. She knows she can’t stay there forever; she’s just biding her time to leave and uproot somewhere else. Where, she doesn’t yet know but its not only her she has to think about now.

Rush is still in Rosemary. He’s a complete wreck and he’s missing Blaire more than he’s ever missed anyone before. He’s become a recluse, staying in and not hosting parties anymore. All he thinks about is Blaire and how he can get her to forgive him. He needs her like he needs air to breath. He just can’t live without her but he understands how hurt she is.

When Blaire moves back to Rosemary, Rush takes it as his chance to try and win her back. He’ll do whatever he can to make her stay in Rosemary and be with him again; to forgive him for everything that has happened in the past few weeks. Can Blaire truly forgive Rush, like he so desperately needs her to do?

With Rush heartbroken over Blaire, he feels that he will never see her again. Feels that she will never love him again and never forgive him. He loves her too much to let that happen.

So when Bethy brings Blaire back to Rosemary, Blaire insists it’s only for a few months, to save up some money and then move on to another city. Somewhere where she can leave Rosemary and all the memories behind. But now that Rush knows Blaire is back, he’s going to do whatever he can to win her back.

Blaire is determined not to let Rush back in. Not to let him hurt her all over again when he decides to leave her. There has been too much between them for her to trust him again, but it’s not that easy for Rush. He’s determined to prove that he’d do anything for Blaire, anything to get her back and anything to be near her. Even shutting out his family for her. Shutting out Nan.

Blaire is torn between wanting Rush and needing to stay away from him, but she still loves him and doesn’t know what to do. Does she want him back? Can she trust him again? And add in the hormones and she’s screwed. Literally screwed. Rush is crumbling her wall bit by bit, pulling himself back into her life and she just can’t let him go. Not again.

But then add in a whole lot of drama in their lives. Misunderstandings – mainly on Blaire’s part as Rush seems to be the one who cocks up all the time, and you have Never Too Far.

These misunderstandings could have easily been sorted out if they both talked to one another when they happened instead of being angry before listening to what actually happened. I suppose with so much history between them, it’s hard to fully forget what has happened and to fully trust again. I think this is why Blaire kept jumping to conclusion about Rush. They were all straightened out in the end, and they do get a HEA. They are perfect for one another.

You find out the truth about Blaire’s father, Rush’s mother and the whole story about the betrayal that broke up Blaire and Rush. By Gosh, I was not expecting that all at. I was hooked on how and what was going to happen after that. That truth has well and truly rocked the boat.

Although my love for Rush reached top level, there were some points in the book where I just got so annoyed at him. He kept messing up time and time again. Not on purpose, but it’s who he is. But the one part I got so angry at was at 80% when he screamed at Blaire. Sorry, I know what happened was truly horrible, but she was only trying to be supportive and if I was her, I would have moved back in with Bethy and told him to get lost. Because she didn’t deserve to be spoken to like that and left alone at night.

And then not to speak to her for 7 days, get Grant to tell you how she is and find out that Woods is helping her out. Sorry mate, you should have called her. She’s your girlfriend.

He always redeems himself, but I don’t know why Blaire stayed. I certainly wouldn’t have.

Still hate Nan. What an evil character. She’s a cold, hearted bitch. When that whole thing (At 80%) happened, I literally couldn’t have given a bigger shit about it. I had no feelings about her at all. Maybe I’m the cold hearted bitch, but I really didn’t care about her at all. I also hated that she wanted to know if she would be in the baby’s life. Why should she be allowed when she had been the ultimate bitch throughout her life and to Blaire? I would have told her to Fuxk off.

But Blaire is too nice. She’s too good. She puts people before herself. She cares so much and even though Nan was the problem, she still wanted to know how she was. It proves how great a character Blaire truly is.

Grant. I loved him in Fallen Too Far. But in Never Too Far, hm, I’m not sure now. Yes, he gave some good advice and was there for Rush no matter what but he seems kind of sneaky now. That he’s hiding something from Rush. I can’t wait to find out in his book what that something is. I do have my suspicions over what it could be. I’ll just have to wait and see if they are true.

Now Woods. Oh how I loved him! He’s brilliant. Such a kind, understanding and pleasant friend to Blaire throughout everything that is happening in her life. His book is going to be amazing! I can’t wait to find out more about him and his life beyond the club. Such a great friend and I hope his book makes me fall in love with him a little bit more. He deserves all the love that comes his way.

Bethy. I loved her character. In Fallen Too Far, Blaire guided her and took her under her wings and you can see how grown up she is now. How much stronger she is and how she takes no bullshit from anyone. She can stand her ground even against Rush. I loved her protectiveness with Blaire, taking care of her and making sure she was okay throughout the book. You could really see how great a friend Blaire had in Bethy and I know that she will be there for her no matter what. They are definitely BFF’s.

There was a lot of sex in this book. Got to love the sexy times. And it was even steamier than in Fallen Too Far. Of course, it was down to hormones but hells yes, give me a Rush fix any time of the day. He’d never leave my bed if that’s how he performs during sex.

I did enjoy the alternating POVS. Loved how we got to see Rush’s pov throughout the book. How miserable is was, how much he needed Blaire back, his feelings and emotions pouring through the book but also how much of an utter idiot he was at times. But he redeemed himself and I knew that no matter what, he would always be there for Blaire. Even when it seemed other things were more important, they all added up to spending the rest of his life with Blaire.

I have to say, the ending was a bit abrupt. I felt there could have been so much more to the story and I did get a bit frustrated when it said “The End”. BUT good news, Abbi Glines WILL be writing a third instalment of Rush and Blaire’s story, albeit it won’t be out until late summer, she said, but we will get to see beyond how it ended. Thank the lord! I need more Rush in my life!

There is going to sound so random, but after I finished the book, I led in bed thinking about their family dynamic.  Like Nan and Rush are half-siblings. Nan and Blaire are half sibling (;)). Nan, Rush and Grant are step-siblings. Rush (maybe Grant, kind of) and Blaire are step-siblings. Holy Moly. Their family is super confusing and there are a lot of questions that I have that I still want answered. Hopefully with Grants book and the third book, Abbi will cover them so I’m not going to worry about them right now.

Never Too Far is about a journey. A journey into trust, love, friendship and family. It’s about standing up for yourself and doing what you think is best for you. It’s about forgiving too. I did really enjoy reading Never Too Far and going through Rush and Blaire’s journey together once again. I couldn’t put the book down at all.

I recommend this book to everyone who wants a Rush crush!!