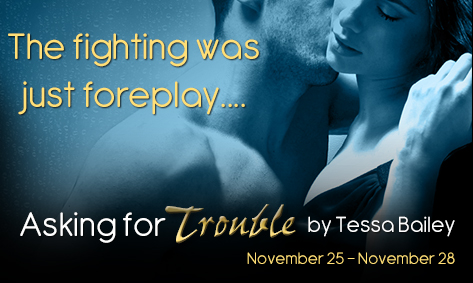 Today on The Book Lovers is my 5 STAR review of Asking for Trouble – Tessa Bailey! 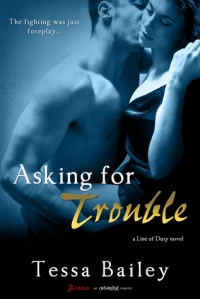 Brent Mason and Hayden Winstead can’t stand each other. She plans exclusive parties for her rich familys charities. He’s a rough and tumble cop who rigs explosives for a living. Could two people be any less suited for conversation? They think not and prefer to keep it that way.

Unfortunately, their two best friends are deeply, disgustingly in love. Forced together, the mutual attraction simmering beneath the surface of Brent and Hayden’s non-relationship grows with every argument until it explodes into a scintillating night of mind-blowing sex. And it wont be the last, as far as Brent’s concerned.

Hayden has a secret, though. Her father’s company is relying on a merger to save them from financial ruin, and only Hayden’s marriage to the CEOs wealthy son can secure the deal. If she’s to protect her family, she’ll have to forget Brent. And he has no intention of being forgotten.

I don’t even know where to start. Since reading Tessa’s first three books, I became besotted with the series. When I found out she was writing a book about Brent, I think I told her how excited I was, because he’s got such a cocky and dirty mouth (just how I like them) and since Daniel (my favourite) and Troy already found love, it’s surely Brent’s turn (and then Matt’s turn).

Tessa definitely has a way with hooking you into her books. The way she writes, the way she can come up with all these scenarios and sex scenes is beyond me. I love how you know the characters, you like them, you hate them (only the bad ones 😉 ) and you just keep reading and reading, until you are at the end and begging for more. For more sex, more of Brent and Hayden (and Daniel and Story) and more of their story. Tessa’s books are always steamy and hot but a beautiful story and journey is wrapped between them – a journey for both characters, from hating each other to wanting each other to falling in love, with obstacles along the way, until they can finally sort through the crap and be together at the end.

Brent and Hayden are thrown together due to their respective best friends Daniel and Story (Officer Off Limits) being madly in love. Brent dislikes Hayden due to her ‘status’ of being a rich bitch who goes to exclusive parties and Hayden dislikes Brent due to his cocky and asshole ways. They don’t get on at all and the only thing they agree on is how sickening Daniel and Story are.

But one night at the pub, Hayden decides to shut Brent up and begins a game with him – a game that changes everything between them. A game which includes secret sex sessions, getting to know each other on a personal level and delving into each others worlds. What can go right…or wrong?

We met Hayden in Officer Off Limits – we knew her as Story’s best friend and someone who comes from wealth. We knew she was funny and sarcastic and totally someone who loves Story to death. We find out soooo much more about her in Asking For Trouble – a whole lot more. She’s feisty, sarcastic, she gives as good as she gets off Brent and all they seem to do it argue and fight. But when Hayden decides to play with Brent, we see her flirty side come out, her sexy side and most definitely her dominant and controlling side in the bedroom. It was refreshing to see a woman take control in the bedroom.

We also see a caring and vulnerable side to Hayden. She loves what she does, running charities for children and she loves her ‘father’ so when he runs into trouble, she has a big decision to think about despite hating the guy who mother wants to her marry to save the company. You really do see many sides to Hayden, but more importantly, you see her fall in love with someone she would have NEVER put herself with. But her and Brent just go together like Peanut butter and Jelly (Cant say I’ve ever had this, but it seems to be the saying LOL).

UHHH Brent. Can I just have a minute to swoon the hell out over my new boyfriend?! I don’t even know where to start because I feel like I’m cheating on Daniel with Brent…it’s okay to have them both though isn’t it? Brent, as I’ve mentioned, is a cocky asshole. He says what he wants, he doesn’t really give a shit either because, well, he’s the shit and he has the dirtiest mouth ever! Oh the things that come out of that mouth….. He submits to Hayden’s demands for control and to be fair, he was bloody turned on by this little minx and this game they were ultimately playing at first. You see Brent shine through, you see how much his family mean to him, how much he supports them, so much so, he’s a blooming gorgeous grease monkey too!

You start to see a different side to Brent too. One that Hayden doesn’t want to see as she just wants to see Brent for what she’s used to, but little by little, both walls are falling and they both begin to feel more than hate for each other the more they get to know one another. But with Brent and Hayden, they don’t tell each other their feelings and just fight and argue all the time, despite secret intense feelings for one another. I have to say the ending! OH my heart stopped for a while over what was happening, but THANK THE LORD it ended that way. Oh, I was so scared!!

I loved the flirtiness between them, the banter was hilarious and then there were the scenes which tugged at my heartstrings, both good and bad, and I just wanted both of them to declare their feelings for each other instead of pussy-footing around it and just admit that they are perfect for each other. They balance each other out, they bring out another side to each other – a side that stays hidden. It was so lush to see Hayden and Brent fall for each other.

I cant not mention the sex. Come on, you should all know me by now. Tessa is the queen of the sex scenes. Queen of submitting you into a quivering mess over her amazing alpha males and their dominance and sexiness not just throughout the sex scenes, but throughout the whole process, from start to finish. Maaaan, Brent can most definitely take me in for a service or handcuff me or do anything he really wants to me because he is one sexy and hot motherfucker. I loved that he also submitted and played along with Hayden too – her fierce and dominate side coming out to play too. These two are just a perfect match in and out of the bedroom.

If you have yet to have the UTMOST pleasure (;) in more ways than one) of reading Tessa’s Line Of Duty series then really, you are missing out big time. We all love a sexy alpha male with a sweet side, we love a great heroine who can stand up to said alpha. We love a great storyline with drama added in and mix in panty-dropping sex scenes, you will find your new favourite series!

Give Tessa a go, you will not be disappointed and will become her biggest fan / stalker, just like me 😉

Buy Links for Asking For Trouble

Want a chance to win an autographed copy of Tessa’s first two books Protecting What’s His & Officer Off Limits? It’s the first time they’ve ever been in print!

She’ll be giving away 3 sets. All you have to do is leave a comment below to enter. Giveaway ends 12/1. Limited to US residents only.