Today is The Book Lovers stop on the Playing For  Keeps Book Blitz and I shall be giving you my review of this awesome book! 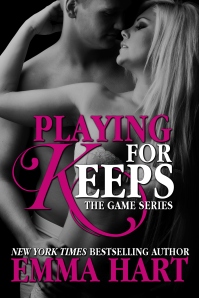 She’s in love with him.
He’s trying not to love her.
One night changes everything.

Aston Banks never meant to get close to Megan Harper – not even for that one night. Haunted by a childhood he refuses to face, he knew she could break through every wall he’d ever built and tear them down without even realizing she was doing it.

Betraying Braden by starting a relationship with Aston wasn’t on Megan’s to-do list, but the second she sees a glimpse of someone other than the arrogant ass she’s come to know, she can’t walk away.

Aston’s childhood is worse than Megan ever guessed, but as he tries and fails to push her away, it’s clear her love is stronger than the demons that cling to him every day. And now, because of it, he finally has to deal with what he’s buried deep down.

What he doesn’t want to face. What he’s fought against for so long.

And they have to do it all without Braden finding out.

Keeping a relationship secret has never been harder.

There is only so many times I can tell you I love Emma Hart – I’m sure she loves hearing it though. She is the best, no joke and if you don’t know of her, don’t speak to her, you are missing out big time. And I mean BIG time.

I want to thank her again for the acknowledgment in Playing for Keeps (my second from her YAY). Oh I have tears in my eyes. Emma is the sweetest person ever!! So thank you for the Beta and the Blogger acknowledgments, you won’t understand how much it means to me ❤

I got to Beta read this book and then I reread it again because seriously? I cannot get enough of Megan and Aston. I was SUPER excited to know they were getting their own book as I loved Megan in The Love Game and I love Astons mouth – the things he says, although I wouldn’t mind his mouth on mine 😉

Emma’s books are like a drug to me. I get hooked onto each and every one of them. I love how she seems to release one every month…it keeps my fix at bay. As I’ve mentioned in every other review of her books, she exudes every emotion in her books. The banter banter between characters, the sexual tension, the tears, laughter, anger, heartbreak…..she conveys it all brilliantly, and by gosh, Playing For Keeps has it all…and your heart will just break for Aston and your heart will then fit back together when you see Megan help him through everything.

As I’ve said so much love for Miss Emma Hart!!

We first meet Aston and Megan in the first book. Megan is Braden’s best friend. They have grown up together and have gone to the same school together. Braden is highly protective of Megan and knows no guy is ever going to be good enough for her, especially his frat house. They are all man-whores and Aston is no exception.

But Megan is harbouring feelings for Aston, and although Aston only wants her for the night, he knows that he won’t be able to let her go after. She is the only girl who he wants to be with but he can’t. He can’t because of his past and because of Braden, but Megan isn’t going anywhere. She can’t walk away now and so thus begins a secret relationship.

Banter the same way they always have around the others but when alone, it’s just them. Them together and they can show their true feelings for one another.

Learning all about Aston’s past, he tries to push Megan away but shes not going anywhere. Keeping their relationship a secret is harder when all Megan wants to do it help Aston through his past and that in turn proves how much she loves him and he her, for letting her in. But when they aren’t so careful and the secret is spilled, how does everyone especially Braden react?

Firstly Aston is not the guy you think he is. Although hes the playboy of the house, seemingly taking a girl back after every weekend party, there is a side to him that no one has ever seen. He keeps it hidden and locked away and he has a front, the front that he shows the guys. He has a potty mouth and I absolutely loved the banter he gives everyone, especially with Megan. But it’s just not him. He has demons that no one apart from his Grampa knows about. His frat house don’t even know his major!! That proves how much he keeps to himself and puts on this playboy front to hide from himself.

Aston has been through so much pain during his life, especially in his younger years. My heart was breaking for him, it was breaking for him and the pain he faced at such a young age had me crying when he would think about what was said to him and when he told Megan about it. It killed me to think how much he went through but he got out and although he still carries his past with him, he has people around him whom love him, even if he doesn’t think hes worthy of it so he tries to laugh it off or push them away.

You really will fall in love with Aston; there is no doubt about it. The potty mouthed playboy shows such a different side. You see him falling in love with Megan, become protective and possessive and jealous over her, but at the same time he tries to push her away, even though he doesn’t want to. It’s hard for him to let someone in, let them know about his past but Megan is there for him, helping him through everything, trying to make him see that it’s over now, that hes loved, hes safe and he has everyone around him who cares for him.

You know how much I loved Megan in The Love Game and my love for her only grew throughout the book. She’s an awesome character. She can banter, shoot sarcastic comments your way and generally keep up with you, but shes always caring and sweet and protective and is completely in love with Aston. She just wants him but is scared about what Braden will think of their relationship, so much so they hide it. But when Aston’s past comes back to haunt him and she finds out about it, she wants to do whatever she can to help and support Aston through his past demons.

She’s loving and I just want her to be my best friend. She is always there for you and the way she was with Aston’s Grampa was so touching. She helped to bring them together even more, to talk about their pasts with the one person they loved/hated. She brought their family dynamic closer, and eventually helped them both with Aston’s demons. No matter how much Aston tried to push her away, she couldn’t and wouldn’t walk away or let him go, she was in too deep with him. He was and is what Braden and Maddie are…the end game.

YES, for those of you who have read the first chapter of Playing For Keeps (The link is below) you will see that sex starts in the first chapter! Yessss, what a way to open the book. Aston and Megans chemistry is instant and they are drawn to each other like magnets no matter how much they shouldn’t be. That first encounter was it. Aston was hooked, as was Megan.

Playing For Keeps really is a book about fighting your past and looking to your future, finding love even when you weren’t looking for it and showing your true self – not hiding behind a persona. Emma has extracted this story with grace and it’s a beautiful book to read, so go and read it!

If you haven’t read The Love Game yet, go and get your Braden and Maddie fix, fall in love with them then come back and get your Megan and Aston fix in Playing for Keeps. You will definitely have a masssssive crush on Braden, Aston and Megan by the end of the books 😉

Here’s to hope that book three is about Kyle or Kay! They are an utter babes and deserve all the happiest that everyone else has 😀

Link to Chapter One of Playing for Keeps on my website: