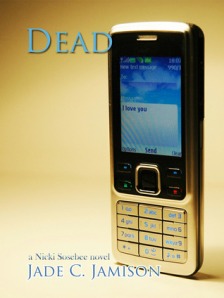 Nicki’s love life might suck, but her sex life is great. The only way both could be spectacular would be if her best friend Sean would look at her as more than just a friend. Nicki knows she’s stuck in the friend zone, so she focuses her energies on her job. She’s becoming a better reporter every day, so when her editor asks her to interview a local politician, Nicki is thrilled. But when the politician’s secretary ends up dead, it’s anybody’s guess as to who did it. Nicki has a few ideas, though, and finds herself in deep trouble as she pokes her nose where she thinks it belongs.

Warning: Not for the faint of heart! This book contains explicit sex and naughty language. Proceed with caution…if you dare

Dead continues a two weeks after where Got the Life finished.

As the Political reporter at the local newspaper is off on a deserved two week holiday, Neal has got Nicki to fill his place, and so off she goes to interview the local Politician, who takes the time to continually talk himself up, causing Nicki to become agitated by it, not that she would show it.

The next day though, his secretary, Sara, is found dead and that’s when Nicki begins to delve into her death. But you know with Nicki, nothing is ever straight forward and she begins to try and find out who killed Sara. But it causes more harm than good for everyone she speaks to and since she’s been poking her nose around, there’s one person who doesn’t want her reporting on the story and would rather her be 6 feet under too.

Nicki has a lot of character development in the second book and with her being called a ‘rookie’ by her boss, I feel she has actually come so far in her reporting; asking questions, trying to get the truth, and seeing different angles to the local news stories. Although she still harbours feelings for Sean, she begins to see Jesse in another light, after they spend a bit of time together at a function held by Commissioner Cannon. I felt her emotions when she was completely dumbfounded over seeing Jesse in a different light. It’s one thing to know someone likes you, but when someone seems to flick a switch and you suddenly see them differently too, it can come all at once and I felt that’s what happened to Nicki, even if she doesn’t particularly want to admit it.

Sean is still his charming self and although there isn’t much of him in this book, as I think it focuses more on Nicki’s life and introducing Jesse to the readers, he’s still in the background as the best friend.

Jesse! I’ve been hearing a lot about him from fellow Nicki Sosebee lovers and although he’s mentioned in Got The Life, you finally get to see a bit more of him in Dead. Although I’m not a fan of kissing smokers, he would definitely be one I wouldn’t mind getting my hands on. He and Nicki have known each other since school and he has been advancing her every since, but Nicki doesn’t really see him as anything but Sean’s friend, but now things have started to change. Jesse is the one who ends up saving Nicki this time, and I can’t wait to see their friendship/relationship develop in the other books. It seems that he could be the one to try and keep Sean off her mind, and it always helps that he sounds utterly delicious.

Jade had gotten me hooked on her books from Madversary, and with all the guys in her books, I’m most definitely in love with them all right now. Ooooh someone pass me a cold drink!

Onwards and upwards to continue book three ‘No Place To Hide.’ Give me more Sean and Jesse!