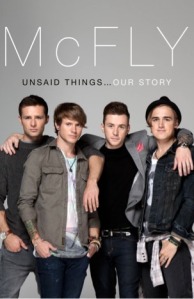 Prepare to meet the real McFly …

In 2003, Tom Fletcher, Danny Jones, Harry Judd and Dougie Poynter came together and formed what would become one of the most popular and successful bands in the UK. Just teenagers at the time, they were catapulted into the limelight and had to adapt quickly to their new-found fame – and everything that came with it. Now, at last, they have decided to tell their story, in full and revealing detail.

Speaking with candour and their trademark humour, Tom, Danny, Harry and Dougie share both the stories of their own lives and that of McFly. They give their personal insights into their contrasting childhoods, the individual paths that led them to the band, the struggles they have each overcome, their love lives and, of course, their music.

Packed with previously untold stories, a lot of laughter and the occasional tear, Unsaid Things offers a privileged look into the lives of four guys who started out as bandmates and became best friends. Their unique camaraderie radiates from every page and by the end of the book, you’ll know them almost as well as they know each other …

For any fan that has followed them throughout their career, i just had to buy the ebook, especially as when i watched Alan Carr: Chatty Man and what was said about Dougie – Him being my favourite – i had to know why he wanted to do what he tried to do.

There were so many things that as a fan i didnt know about. Especially the downward spirals, the really heated arguments between two of them, and the real story about how they got together.

I read it in about 3 hours, i would say – I couldnt put it down and after reading it, its made me rekindle my love for them once again. Although I am probably considered an older fan, i have loved them since the very beginning, going to see them on tour etc and although i am older now, they will still have a place in my heart as i was such a teenie bopper for them in my young days.

Dougie will always be my favourite, and reading about his dark side, i had tears in my eyes and i really didnt want to read about him wanting to *beep* himself and his time in Rehab, but i pushed forward and it makes you think about how many other bands have these private secrets that the public dont know about. Glad they all came out the other side happier and closer