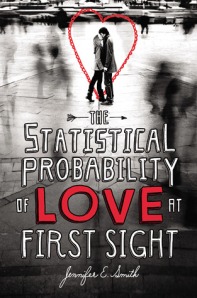 Who would have guessed that four minutes could change everything?

Today should be one of the worst days of seventeen-year-old Hadley Sullivan’s life. Having missed her flight, she’s stuck at JFK airport and late to her father’s second wedding, which is taking place in London and involves a soon-to-be stepmother Hadley’s never even met. Then she meets the perfect boy in the airport’s cramped waiting area. His name is Oliver, he’s British, and he’s sitting in her row.

A long night on the plane passes in the blink of an eye, and Hadley and Oliver lose track of each other in the airport chaos upon arrival. Can fate intervene to bring them together once more?

Quirks of timing play out in this romantic and cinematic novel about family connections, second chances, and first loves. Set over a twenty-four-hour-period, Hadley and Oliver’s story will make you believe that true love finds you when you’re least expecting it.

Love at first sight has always intrigued me. Can people actually fall in love with a glance to each other or is that just classified as lust?

Hadley is off to London for her dad’s second marriage to a woman who she has never met and will also be seeing her father for the first time in a year – minus telephone calls. She’s not exactly ecstatic to be going and would rather stay home than fly across the pond to be a bridesmaid.

4 minutes late for her flight and Hadley is stuck in JFK for another 3 hours, to wait for the next flight to London. As a claustrophobic, this is her idea of hell, being around people and in cramp spaces, but then she meets Oliver, a British boy studying in America and they begin to talk. More excitingly, he’s sat in her row on the plane.

After a long night on the plane, all different topics of conversation floating between the two, moments of sleeping on each other’s shoulder, fleeting looks, and Oliver keeping Hadley’s mind off being confined in a tiny space, the time has passed and it’s time to land and part ways after a perfect flight of being together.

As Hadley and Oliver are forced to go separate ways through customs, reaching the other side with the chaos of people everywhere, she waits for Oliver but she loses him and she has no more time to wait as she’s already going to be late for her Dad’s wedding. Will they ever meet again?

It’s set over a period of 24 hours, but my god, it seems so much longer, probably because so much is happening in this book and so many emotions are conveyed by all the characters. It really is a story with ups and downs, with a few tears included on some parts – from me of course.

It’s about family’s coming together again, a simple meeting turning into someone more for both Oliver and Hadley and both joy and sadness wrapped in both their stories.

It was such a nice little love story to read and especially as over the course of the book, Oliver hadn’t told Hadley what he was studying and researchng and he kept giving her false answers, but when you find out, you can’t help but laugh as its completely adapted into the story.

A totally fluffy love story that you wish would happen to you someday.

When I was fourteen, I made a decision. If I was doomed to live in a trailer park next to an airport, I could complain about the smell of the jet fuel like my mom, I could drink myself to death over the noise like everybody else, or I could learn to fly.

Heaven Beach, South Carolina, is anything but, if you live at the low-rent end of town. All her life, Leah Jones has been the grown-up in her family, while her mother moves from boyfriend to boyfriend, letting any available money slip out of her hands. At school, they may diss Leah as trash, but she’s the one who negotiates with the landlord when the rent’s not paid. At fourteen, she’s the one who gets a job at the nearby airstrip.

But there’s one way Leah can escape reality. Saving every penny she can, she begs quiet Mr. Hall, who runs an aerial banner-advertising business at the airstrip and also offers flight lessons, to take her up just once. Leaving the trailer park far beneath her and swooping out over the sea is a rush greater than anything she’s ever experienced, and when Mr. Hall offers to give her cut-rate flight lessons, she feels ready to touch the sky.

By the time she’s a high school senior, Leah has become a good enough pilot that Mr. Hall offers her a job flying a banner plane. It seems like a dream come true . . . but turns out to be just as fleeting as any dream. Mr. Hall dies suddenly, leaving everything he owned in the hands of his teenage sons: golden boy Alec and adrenaline junkie Grayson. And they’re determined to keep the banner planes flying.

Though Leah has crushed on Grayson for years, she’s leery of getting involved in what now seems like a doomed business—until Grayson betrays her by digging up her most damning secret. Holding it over her head, he forces her to fly for secret reasons of his own, reasons involving Alec. Now Leah finds herself drawn into a battle between brothers—and the consequences could be deadly.

Leah Jones has moved from town to town, trailer to trailer all her life due to her mother always moving them when her boyfriends tell her there is a job for her and now she is finally living in Heaven Beach, in a trailer park next to a small commercial airport.

Leah, at 14, gets picked on at school and her only escape is her job at the airstrip, working for Mr. Hall at his banner advertising business. She can only do office work but it’s her dream to fly an airplane, so when she has saved enough money from her wages, she forges her mums signature and hands it over to Mr Hall, in exchange for a flying lesson. And so it starts.

Fast forward three years and Leah is now flying planes for Mr Hall and she loves it. There’s nothing better than being free in the air, controlling her own destiny and not having to worry about life when shes in the air.

Mr Hall has three sons, Grayson and Alec, who are twins and Jake, who is older than the twins. Although Leah doesn’t know them, she sees them when they visit their father but they don’t associate with her as they think they are ‘above’ her and that shes having an affair with their dad – they cant be further than the truth as Leah thinks of Mr Hall as a surrogate dad.

When Mr Hall dies, from the stress of Jake dying in the war, Leah has no idea what she is going to do as she assumes the business will shut down and she will be out of a job. But instead, Grayson and Alec decide they are to keep the business and keep Leah as a pilot – although Grayson has other ideas and blackmails her in return for keeping her job.

This is where all the major drama appears. Being blackmailed into dating Alec, even though she has no idea why she has to date him as Grayson won’t tell her, you can see the torment in Leah as she needs to keep her job but then she doesn’t like Alec that way – its always been Grayson she has liked, but she really needs the job and so she agrees, reluctantly.

During the course of the book, you see the emotions of all the characters, especially Leah and Grayson. As much as he wants to stay away, he looks out for Leah when her mum isn’t there – which is most of the time – so when a storm is brewing, he takes her to safety, away from her metal trailer to the basement in the airstrip and that is when you know, that he is totally in to Leah, even though he doesn’t want to admit it. But throughout the book, parts where she has to pretend to like Alec, you can figure out his jealousy over the two of them, even though Leah only thinks of Alec as a brother.

Over due course, it was obvious that Grayson had feelings for Leah, and he knew she liked him but he wouldn’t do anything about it. It was about keeping Alec at the airstrip and putting him first before himself, which is actually really nice of him to do, but it hurt Leah to be blackmailed when all she wanted was for Grayson to see her. When he finally got his act together, i was smiling so badly! My poor, flawed, jealous Grayson, you finally got what you have wanted all along.

There is so much more that I would love to talk about, but I don’t want to write a massive spoiler before you are all read it. Let’s just say, there’s an accident which makes characters shift their butts into gear and i was so glad of the ending. It was super cute that all the characters got a happy ending and ended up with the person they wanted to be with.

This is the first book i have read from Jennifer Echols but it certainly wont be the last. I absolutely loved this book and it had me hooked. I read this when I had free time during my holiday to Paris and this story was all i could think about all day until we would come back to the holiday to relax before going back out. When a book gets to me like this, you know its a great read!

Read this book, if it’s the only one you do.