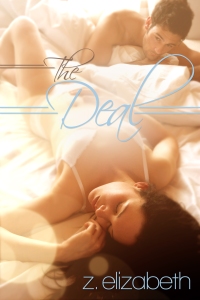 Now with my cover out in the world, I want to give you some background on why I ended up with my lovely cover.

You should all know by now that The Deal was written eight years ago when I was 15 – it was actually a fanfiction for McFly *blush* and I have no idea how the hell I came up with the story! I’m now 23 and of course, everything written in the young The Deal – otherwise known as ‘Love, Sex and Marriage’ (Don’t ask why it was called that when the only sex scene was at the end when they got married, other than that it was tame, apart from a coma scene, which is NOT in The Deal) has changed a hell of a lot. I have life experience and sex and relationship experience and when I was 15 I did not have any other these, so yes, The Deal was completely rewritten but the storyline is still kind of along the same lines as L, S & M.

If you followed me when I was a book blogger, you will see the majority of my reads are NA or Erotica/Romance and when I stumbled upon L, S & M one day on my laptop, I was going to re-write it as YA…well, that story was YA anyway, but after I found the sequel, yup, I started a sequel, I read a sex scene I had written and I sent it to some blogging and author friends who told me that L, S & M should not be YA. It should be NA. So I got down to writing NA but then the sex scenes came along and I couldn’t be tame with them, I had to make you see the sexual tension, the burning touches, the passion that exploded between them in the bedroom and I couldn’t do it if I held back on how they made each other feel. So the book changed to Erotic Romance.

So with the book being Erotic Romance, I had to make sure the sex scenes weren’t just a filler but a build-up to spilling their guts to each other. From the synopsis, you know that Nic and Craig have been in love with each other since they were sixteen, but they were enemies and they didn’t communicate unless they had to despite desperately wanting to be with each other. I’m hoping you can see and feel the longing they both have for each other, which is why I wrote it in a dual POV too, because I wanted you to know Craig’s side, know his feelings for Nic, much like Nic shares hers about Craig. He was so easy to write! Why are guys’ POV easy? I hated writing Nic’s haha.

If you have read the introduction to Nic and Craig, you will see that because of their personalities, it took me FOREVER to find the right cover. I was sending Anna Bloom links upon links of possible covers but when I came across this one, I knew, just knew that it showcased Nic and Craig perfectly. It’s not overly sexy and it has a touch of longing too. Craig longing for Nic from afar (okay, across the bed) and Nic ‘asleep’ after a sex workout. I wanted to convey my character’s feelings, especially Craig’s, on the cover and Laura Beege, my amazing friend went through a few different designs until she sent me this and that was it. I knew it was the one. The lightening, the colours, just everything spoke The Deal to me and that’s the cover you are seeing now!

I hope you can make the connection between the cover models and Nic and Craig when you read The Deal. Feel the heartache, the love, the longing in secret for one another. That is definitely how I feel when I look at the cover, and I hope you do too!

2 thoughts on “The Deal behind the cover.”