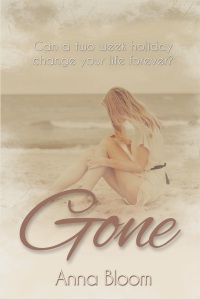 Rebecca Walters harbours a dark secret, and as the fifty-three bangles she wears on her wrists as a self-imposed sentence of guilt remind her, she can’t even begin to consider moving on. Not after what happened on that night six months ago… a night which she can’t remember and yet managed to change her life forever.

When Rebecca comes across Joshua Adams, man equally haunted by past tragedies, on a moonlit beach, both of their lives are destined to change forever, and when the girl made out of the sun meets the boy made out of the moon and sea, anything can happen… but will the knowledge of their murky pasts bring them together or drive them apart?

Will Rebecca finally be able to claim her freedom? Will she stay and fight to be the girl she found on the sandy beaches of Cornwall or is she destined to keep running and hiding from a past that won’t stay Gone? One thing’s for certain: either way, nothing will ever be the same again.

If you know me, you know that I am actually pretty much in love with Anna. I read The Art of Letting Go before anyone (okay, so I am boasting now) and she’s been stuck with me ever since. Anything she writes, she knows that I will pester her until she gives it to me. And Gone was no exception. (I’m kind of her writing buddy, BUT I will never ever be bias when writing this review, full honesty is what I am about, and what I have always been about, and regardless, I will never favour anyone).

If you are thinking its similar to The Uni Files then you are sourly mistaken. It couldn’t be further away and d’ya what, I love that. Gone is beautiful and devastating and it’s just refreshing from other books out there that I have read recently. Anna writes with a flare just draws you in. She puts blood, sweat and tears into her books and she produces master pieces. Gone is definitely one and its one that you should recognise too. One that should be downloaded and read immediately.

I love books that are set in the UK too and Gone is set by the beach where a super hot surfer artist called Joshua (or dreadlock boy to me) and a grungy, angry and sad girl called Rebecca, or Bex meet. They are both as broken as each other, both hiding secrets from each other but together, they are something else. They make the past, the bad things just disappear. They ease the pain a little bit more each day. Until they are both ready to bare their secrets to one another.

Rebecca, at eighteen has led a rough couple of months. Due to her secrets, her family up and move to Cornwall from London to leave the past behind. Bex is a feisty one (I just had an Inbetweeners moment). She wears grungy clothes, she stomps around and all she has to do is stay for two weeks, show her parents she can behave and they will let her go and pay her university fees. Can she do it?

I adored Bex. She is keeping a deep secret and the bangles she wears are a reminder of that secret. From start to finish, you feel a sense of pride. Like she is your friend or sister or daughter. We watch her blossom throughout the book. We watch this feisty redhead break her barriers down, and let in Joshua and her family. We watch her style change too. No more heavy make-up, no grungy clothes. She becomes herself. And its all thanks to Josh. That bloody amazing boy.

Despite her guard, there is a sad and vulnerable girl behind the façade and when we see her shed it, you feel so proud of her for letting Josh in. For becoming stronger in herself and welcoming love from everyone in her life. She’s been so scared and afriad of everything, always blaming herself that she didn’t take the time to see how everyone else sees her, especially Joshua, his girl who is made of the sun.

Joshua. Dreadlock boy. I LOVE HIM. I did claim him too but I got called greedy because Ben is mine. This boy. This amazing, broken surfer boy who is a genius with a paintbrush has a secret too. He no longer paints. He no longer goes clubbing or drinking and he feels like he will never be the same again. But a chance meeting with Bex has him all tizzy.

I grinned at how he would describe her, how he would tell us of his thoughts and feelings over her. He is the perfect gentleman and he makes my heart swell watching him become alive. Watching him, just like Bex rid of the guilt and the pain and succumb to each other. He wants to get to know her. He wants to be with her that he will do whatever he can to make her stay.

GAH I cannot begin to explain my love for my dreadlock boy. There is just something about him. Some kind of aura that makes you drawn to him, to his characters, his actions. He is healing as much as Bex is and my heart swelled at the both of them together. How they fought the past, the guilt, the haunting demons and they did it together and alone. They faced them and knew that if they can do that, then they can do anything together. Love prevails after all and the Boy made of the Moon and the Girl made of the Sun deserve every bit of happiness.

Gone is set over a two week period but in no way was it insta-love. To be honest, Anna has done something that a few authors cant. She made it seem like Joshua and Bex had known each other forever. That their relationship was a slow burner and it felt like months instead of two weeks. THAT is why you should pick this book up. And you know, because it is freaking amazing and deserves all the success that comes its way.

The chemistry between the two of them is magical. They dont get off on the right foot but once they talk, you can see that they are both going to change one another. They are going to enjoy each other’s company. There is that spark that will melt your heart and you will insta-love them too ;). They are two characters that you will smile over, laugh over and swoon over. But their stories will break your heart and you will understand so much more about their little titbits, especially Bex’s. But they bring out the best in each other, they bring out so much more than I can say and I am so glad I got to be a part of knowing them because I adore Dreadlock boy and Bex so much.

Anna Bloom is a contemporary romance writer who writes about life as it happens. Combining a busy schedule of looking after two small children whilst working in a local school and completing The Uni Files series she also spends a lot of time imagining kissing hot guys – all in the name of her art.