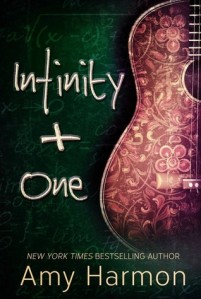 Finn Clyde is a nobody. He’s broken. He’s brilliant. He’s impossibly cynical. And all he wants is a chance at life.

One girl. One boy. An act of compassion. A bizarre set of circumstances. And a choice – turn your head and walk away, or reach out your hand and risk it all?

With that choice, the clock starts ticking on a man with a past and a girl who can’t face the future, counting down the seconds in an adventure riddled with heartbreak and humor, misunderstanding and revelation. With the world against them, two very different people take a journey that will not only change their lives, but may cost them their lives as well.

Infinity + One is a tale of shooting stars and fame and fortune, of gilded cages and iron bars, of finding a friend behind a stranger’s face, and discovering love in the oddest of places.

Bonnie and Clyde has always intrigued me. And when I found out Infinity + One was a loosely based upon their story, I knew I had to read it as soon as it came out. A rich country singer who has reached boiling point and who just wants to die, and a nobody who just wants a chance at life. Together though, they may just be the best damn thing to happen but that isn’t what the news channels are saying. But when does the news ever get a story right?

I thoroughly enjoyed this book, from start to finish. I have been in a major reading slump and then I picked up Infinity + One and I was hooked on it. Amy has me picking up my kindle at every opportunity, wanting to know more about Bonnie and Finn (Clyde), about what would happen when their past and future caught up. I adored Making Faces and I knew that this book would be a great read too, and I wasn’t disappointed. From the maths involved from Finn, and the songs from Bonnie, you can see the passion and the energy and the hard work put into the book and the end result is an awesome read!

As mentioned, it’s loosely based upon Bonnie and Clyde. Despite running from the law, they did one thing right, they loved each other so much they would died for one another. And just like our Bonnie and Clyde who were running away from their past and future, they too, loved each other. This is an instalove book, but it doesnt feel like it. There is so much packed into this book it feels like they have known each other for ages, that their love has evolved and they haven’t fallen in love in the few days they are running away together – it really is a whirlwind romance which will have you hanging onto every step of the way.

Infinity + One begins with Bonnie Rae Shellby having enough of her popstar lifestyle. She’s done with it. She’s been the good girl following all her gran’s demands but shes had enough. And that is how Bonnie is ready to kill herself. But due to fate or just a random act of compassion, Infinity James Clyde, or just Finn, stops her. And that, ladies and gentleman begins the start of their story. One where they are running away together, one where they are running from the media, who are ‘following’ their story and running away from everything, especially each other. But two people who have so much more in common than they thought cant stay away, and its just like the real Bonnie and Clyde, their love overpowers everything else.

I sympathised with Bonnie. She is going through a hard time, she is grieving and I just wanted to give her a massive hug. She’s a hard worker, always having demands thrown at her from her gran and it’s enough. She’s had enough. Her gran is cashing in on her grief and she wants to cut loose. She’s struggling and the only thing she can think to do is take off – run away forever – but fate steps in in the form of Finn and as they say the rest is history. Bonnie is crazy, shes funny and loud and blunt but she is also sad and that is the hardest emotion to hide.

But what I liked the most? She came out of her shell. She had Finn by her side, she had love in her heart and that together is a dangerous combination that worked out amazingly. She grew a pair, she laid down the law and she overcame everything because she trusted in her love, she trusted in Finn and when that is greater than everything else, you know you can do anything. Infinity + One = Bonnie and Clyde forever.

Infinity or Finn or Clyde is trying to get away from his past. He wants to start afresh where no one knows who he is or what is supposedly did. Maths has been his way of life. He loves numbers and it has saved him more than once over the years. Then one night he sees someone and he knows he has to stop whatever is about to go down and this begins his story of Bonnie and Clyde. We get dual POV’s which I always love because we got to see the encounters, the trips and ‘adventures’ from both sides. We get to delve into the silent, strong but scared head of Finn. We get to understand his love of maths and how it saved him, we see his past, from his pov and the media’s and we see how scared he is of his feelings for Bonnie because they consume him and he doesnt know what to do. Whether to kill her or kiss her at times. But even if he knows he would be better off without her, he just cant let her go. He fights it, hell he does, but in the end, its Bonnie. He’s found his other halve again and there are so many signs leading to both of them that maths really does save him.

He’s cynical, he just wants to get to Las Vegas, get on with his life and with Bonnie, well she has switched him all around. For a broken guy who wants to leave his past and live, and from a rich popstar who has had enough of life, they sure inject passion and life back into one another. Reminding one another that they were meant to meet, that the signs were all pointing their way and that despite losing their other halves, they had one another, they were each others significant others. The road certainly led to both of them.

I really enjoyed the new reports following Bonnie and Clyde. I hated how there was so many lies being spouted without any real truth to what was happening. But then I suppose that is what makes this book that bit more real. New channels will report on anything news worthy even if it is a lie (This is coming from a graduate journalist). It makes it for an entertaining story but I felt so sorry for Finn. His past being splashed on the cover of magazines and the TV. My heart went out to him as he was being convicted for something he wasn’t even doing. But you need to go through the hardships to get to the end, and that is exactly what Bonnie and Finn did, what they do.

Amy has written a great book and it is one that you should read. Yano, right now. It is the weekend and that is what reading is for! Now I am off to research more Bonnie and Clyde things, because this book has made me even more intrigued about them.