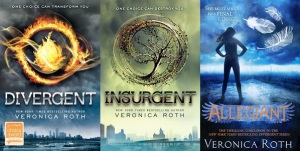 In Beatrice Prior’s dystopian Chicago world, society is divided into five factions, each dedicated to the cultivation of a particular virtue–Candor (the honest), Abnegation (the selfless), Dauntless (the brave), Amity (the peaceful), and Erudite (the intelligent). On an appointed day of every year, all sixteen-year-olds must select the faction to which they will devote the rest of their lives. For Beatrice, the decision is between staying with her family and being who she really is–she can’t have both. So she makes a choice that surprises everyone, including herself.During the highly competitive initiation that follows, Beatrice renames herself Tris and struggles alongside her fellow initiates to live out the choice they have made. Together they must undergo extreme physical tests of endurance and intense psychological simulations, some with devastating consequences. As initiation transforms them all, Tris must determine who her friends really are–and where, exactly, a romance with a sometimes fascinating, sometimes exasperating boy fits into the life she’s chosen. But Tris also has a secret, one she’s kept hidden from everyone because she’s been warned it can mean death. And as she discovers unrest and growing conflict that threaten to unravel her seemingly perfect society, Tris also learns that her secret might help her save the ones she loves . . . or it might destroy her.

One choice can transform you—or it can destroy you. But every choice has consequences, and as unrest surges in the factions all around her, Tris Prior must continue trying to save those she loves—and herself—while grappling with haunting questions of grief and forgiveness, identity and loyalty, politics and love.Tris’s initiation day should have been marked by celebration and victory with her chosen faction; instead, the day ended with unspeakable horrors. War now looms as conflict between the factions and their ideologies grows. And in times of war, sides must be chosen, secrets will emerge, and choices will become even more irrevocable—and even more powerful. Transformed by her own decisions but also by haunting grief and guilt, radical new discoveries, and shifting relationships, Tris must fully embrace her Divergence, even if she does not know what she may lose by doing so.

The faction-based society that Tris Prior once believed in is shattered—fractured by violence and power struggles and scarred by loss and betrayal. So when offered a chance to explore the world past the limits she’s known, Tris is ready. Perhaps beyond the fence, she and Tobias will find a simple new life together, free from complicated lies, tangled loyalties, and painful memories. But Tris’s new reality is even more alarming than the one she left behind. Old discoveries are quickly rendered meaningless. Explosive new truths change the hearts of those she loves. And once again, Tris must battle to comprehend the complexities of human nature—and of herself—while facing impossible choices about courage, allegiance, sacrifice, and love. Told from a riveting dual perspective, Allegiant, by #1 New York Times best-selling author Veronica Roth, brings the Divergent series to a powerful conclusion while revealing the secrets of the dystopian world that has captivated millions of readers in Divergent and Insurgent.

I’d been meaning to read the Divergent series for months now. I hate going to see a book film adaptation without reading the book, so when the release day was nearing, I got to reading the series (and maybe just a little bit persuade by Holly to begin it too). This review will be about the three books, seeing as I just continually read one after the other, and to be honest, with so much packed into each book, what happened in which book is kind of a blur. So bare with me on this one, it may be a bumpy road in terms of this review haha.

If you haven’t heard of the Divergent series, firstly, where have you been? And secondly, you do know the film is out right? Anyway, for those who don’t know, the series revolves around a young woman called Beatrice. She is in Abnegation, one of the five factions in her ‘city’. Her faction are known as the ‘Stiffs’, for obvious reasons, and they are selfless, always helping and putting other first. When you are 16, you take a test to determine which faction you ‘belong to’ and thus at the choosing ceremony you can either stay with your faction or move faction, depending on the results of your test. For Beatrice her tests are inconclusive which means she is a Divergent and that is dangerous.

On choosing day she has a tough decision, stay with her family or be who she truly is and change factions. She changes and that day changes the rest of her life…and thus begins a romance, a war and a lot of trying to stay alive and keep the ones she loves alive, even if it means dealing with the consequences of her actions and hurting the ones she loves too.

I really liked Beatrice/Tris as a heroine. We first meet her, she is clumsy, Abnegation is all she knows but deep down she knows she is different and when she finds out she is Divergent and chooses the Dauntless, that is when her life changes for the best and worst. We watch her grow up so much throughout the book, from a timid and intrigued young women to a strong and fearless young women.

She pushes herself to the limits and you actually feel proud of her. She really is a Dauntless fighter, so brave and fearless and stupid at times, but that is what makes Tris, Tris. She truly is Divergent and the more we know about her, the more you can see that. She had bits of each faction in her, bits that save her life time and time again but bits that also put her in danger. We watch her grief, we watch her sacrifice but most of all, she does this to protect the ones she loves, protects those who cant protect themselves really. She puts herself out there and although they come with consequences, you know that Abnegation has and will always be implanted in her. To make her selfless in terms of what she does.

I liked knowing she was in love with Four. I did like these two together. They brought out the best and worst at times but over the books, I just wanted Tris to let Four go. Although I felt bad for him, because Tris didn’t trust easily with strangers and thought things through, Four jumped straight in and this was the cause for nearly every argument – that and Tris’ death wish. But how it ended between them, my heart was skipping and I knew it really was the end. Over the three books you are not only invested in the storyline, but in Tris and Four too and my head kind of bleed when it was all over.

I had a theory about Tris in Allegiant. This theory was that deep down she was still Abnegation and she was selfless and when I turned the page and got to the part that everyone is majorly pissed at, I felt a bit of pride for actually being right about it. I knew what happened in Allegiant as before reading them, I wasn’t going to, and my friend Anna Bloom told me what happened (She refuses to read the book hahah) I just didn’t know how it happened. But to be honest with you, I didn’t feel anything towards what happened. It really is for shock value, and it could have ended up differently in my opinion, but then fair enough on Veronica, she wanted to rock the boat and make us see that not everything can have a happy ending. I’m trying hard not to give away what happens so I’m going to keep my mouth zipped now.

This is a little bit controversial because so many people adore Four/Tobias. I actually really liked him in Divergent. He is strong, a bit of a leader, keeps to himself (because of his Divergence) but when Tris comes along after the Choosing Ceremony, she seemingly puts him in a spin. Despite being a bit of a wanker towards her, you can see he is trying to help her through initiation, knows she is Divergent and wants to protect her from the people wanting to kill them. He opens up himself to her, takes her in his fear landscape – which he has never shown nor taken anymore before – and you can see a romance brewing between them. You can see she has effected him and they are both great together – they both have the need to fight, to be together, to protect each other from the war brewing and you know that one cannot live without the other.

BUT, this is a massive but, as the series went on, my love for Four turned into annoyance, turned into dislike, especially in Allegiant where I wanted to smack him nearly every page.

I did sob my heart out for the last few chapters. I was texting Anna Bloom about the event that takes place and when Four arrives, the floodgates opened and I didn’t stop crying until the very end. Even after it was the in the front of my mind, replaying. Despite not being a fan of the end, I don’t think there could have been another way to end it – unless Veronica didn’t write that massive event in.

I just cant wait to see how this all pans out in the film versions. There is so much that happens that I’m hoping they do a great job in portraying as much as they can, as accurately as they can in Insurgent and Allegiant. Here’s to the next films!