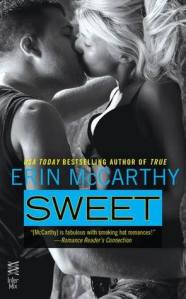 Jessica Sweet thought going away to college would finally make her free of her parents’ constant judgments and insistence she play chastity club role model for their church events, but if anything, the freedom has made her realize she can’t go home and be a hypocrite anymore. Tired of dodging their questions, she stays at school over the summer and lands in an unexpected crash pad: Riley Mann’s house.

Sarcastic, cocky, and full of opinions, Riley is also sexy personified with tattoos and biceps earned from working as a roofer all day. Not the right guy for her even if Jessica was looking for a relationship, which she is definitely not. But Jessica knows that Riley hides the burden of having to raise his younger brothers behind that grin and as she helps him get his house in order for a custody hearing, they begin to fall hard for each other, and she is forced to question what she’s hiding herself.

Jessica has never had a problem getting naked with a guy, but when it comes to showing Riley how she truly feels inside, her fear of rejection may just ruin the best thing—the best guy—to ever happen to her…

My review of TRUE

“Would you be okay with it if I fell in love with you?”

I thoroughly enjoyed the first book of the series True and you can read my review by clicking the link above. When I found out about Sweet and it being Jessica’s book, I couldn’t wait for it to be out. In True, we see Jessica as a party girl. She likes to go out, have fun and have the attention of guys on her. She was behind the plan to get Tyler to help Rory loose her virginity after Rory accidentally blurts out she has never slept with anyone. We see that Jessica doesn’t associate sex with feelings – as we know she slept with Tyler and doesn’t care that he and Rory are now in love.

I have to say, I absolutely loved this book…more than True. I’m not sure what it was about it but I was besotted with both Riley and Jessica, about them both, especially Jessica’s life as we don’t know about her life back at her parents house. We find out a lot of Jessica and I really liked her; she wasn’t how we know of her in book one and she grows up a lot in Sweet that you cant help but fall in love with her.

Behind her party girl persona, is a girl who hasn’t experienced life like the rest of her friends – especially Tyler and his family. Growing up in a strict religious household has made her do the opposite of everything she has been brought up to do. She drinks, parties, sleeps with guys and if her parents found out, she would be disowned by them. She hates living a lie, but she feels she had no choice in the matter at all. Her parents have dreams of her being a ministers wife, like her mother but she doesn’t want that at all.

She has her own dreams but they seem to be pushed away in favour of her being the spit of her mother and her fathers marriage. Being away from home, she can truly be herself, and that’s why when school is over for the summer, she lies and tells her parents she is going away with a charity, when in fact, she is staying and working all summer before moving into her shared flat….but she has a week of being homeless and with Tyler, his two brothers and Rory going to her fathers for a week, she moves in with Riley….What can happen during that week?

Jessica, as her name states, is actually really sweet. She doesn’t think she is, but the things she does for Riley, to help him out, to make his house a real home. We see her relax, we see her upset, we see her feelings for Riley change and we watch her fall in love. It was so nice to see this side to Jessica, one that makes her real. She can banter like hell with Riley, she can have a laugh and a giggle with him and we can see just how strong that pull is between them, their chemistry sizzling and it was only a matter of time before either of them did anything about it.

Riley is the oldest of his brothers and he will do whatever he can to make sure they are all together. He’s sexy, cocky, gives as good as he gets but behind that persona is someone who works hard to keep a roof over his families head, and he does have a sweet side. He doesn’t like to judge as many have judged his family and although he and Jessica bite at each other, he likes her around. The hard man act makes Riley, Riley, yet when a letter from social services comes through, his walls collapse and he shows his vulnerable and scared side. I liked seeing this from Riley and I liked that he let Jessica in to seeing that too.

The more time they spend together, the more that Riley sees that Jessica is sweet and kind and really thinks of others before herself. Deemed as a party-goer, she truly has a big heart and I think that was one of the reasons that Riley fell for her. She cared about him, about him getting to keep his brother and she was the main core of helping anyway she could if it meant the family stayed together.

The two of them together, when they actually admitted their feelings and ‘the princess and the prick’ gave it a go (Riley’s words) they were super cute. Both had never been in a relationship before so it was new to them both, but they did a pretty damn good job of ‘giving it a go.’ Riley was romantic and you could see how much he loved being with Jessica, how in awe he was of her, of her strength, her courage (with her parents) and determination. Jessica saw through Riley’s big man persona and saw someone who loves hard, who appreciates his family and who loves with everything- the things he would say to Jessica had my heart in a flutter – like the quote above. I CRIED AT THAT PART.

I also understand Jessica’s frustrations with Riley wanting to wait for have sex, as he wanted to win her heart and trust, not wanting a one-night from her as he doesn’t do that. It’s all or nothing. You don’t need the sex for these two to make the book – the little touches and the kissing do it just fine, but it was nice to see them eventually have sex, mind blowing sex which seriously connected them in every way. The wait for them both was worth it!

I love this book and I did smile, laugh, tear up and have my heartstrings pulled a few times throughout the book, but the journey both these characters go through makes them better people. From two people who disliked one another and bantered and bit at each other, you can see that they really are for one another. Everything you thought about Riley and Jessica will be flipped and you will end up completely rooting for them and loving them too.

Here is to waiting for Robin’s book!