Five months ago, Amanda Nathan was a dumped, scorned, and tragically bored moderator for the Internet’s largest gossip community “HDU,” spending her small town days and nights hiding her pitiable life from catty neighbors. Then, she became an overnight sensation after negotiating a contract to stage a romance with Hollywood’s favorite womanizer, going from moderating the pages of HDU to gracing them daily.

Now, there are no contracts involved in Amanda’s life — she’s on top of the world with not only a job on the TV writing staff of Leadoff but a Hollywood publicist, a pumped up wardrobe, and a real-life, contract-free boyfriend in the former womanizer, Liam Brody.

But how long will the good times last in an industry known for the worst kinds of drama? Amanda’s high fashion closet isn’t exactly free of skeletons considering her past with actress Casey Mulreed, creator of Leadoff’s rival TV show, Legacy — a prodigy and darling so loved by America that her recently outed addiction can’t keep her from the very top of the industry, where she has every last intention to stay. And of course, keeping that crown requires butting heads with Amanda — to say the least.

Good thing this time, the small town girl from Merit, Missouri is just a tad more prepared to handle that signature Hollywood scandal… 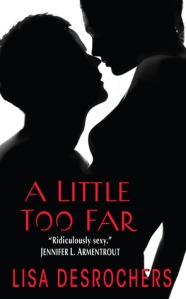 A Little Too Far – Lisa Desrochers

Have you ever gone just a little too far?

Yep. She just had mind-blowing sex with her stepbrother. In her defense, she was on the rebound, and it’s more of a my-dad-happened-to-marry-a-woman-with-a-super-hot-son situation. But still, he’s been her best friend and confidant for the better part of the last few years … and is so off limits. It’s a good thing she’s leaving in two days for a year abroad in Rome.

But even thousands of miles away, Lexie can’t seem to escape trouble. Raised Catholic, she goes to confession in hopes of alleviating some of her guilt … and maybe not burning in hell. Instead, she stumbles out of the confessional and right into Alessandro Moretti, a young and very easy-on-the-eyes deacon … only eight months away from becoming a priest. Lexie and Alessandro grow closer, and when Alessandro’s signals start changing despite his vow of celibacy, she doesn’t know what to think. She’s torn between falling in love with the man she shouldn’t want and the man she can’t have. And she isn’t sure how she can live with herself either way.

20-year-old Lilac York doesn’t like to talk. She doesn’t like to exist outside her books, and she certainly does not like to be involved with the most notorious playboy in uni. But when the gorgeous and arrogant billionaire Nick Christakos asks her to be his friend, she finds herself saying yes, no matter what “friend” could mean to a serial bed-hopper like Nick. There’s just something about him that draws her, something that makes her think he wouldn’t mind if he learned just how broken she was inside.

Nick Christakos is not used to denying himself. But for the sometimes-aloof, sometimes-naïve Lilac he strives to make an exception, doing his best to keep his hands off her even though just one blink of her doll-like eyes has him on fire. With Lilac, he’s not afraid to show the ugliness in him. When she looks at him, Nick almost believes there’s still hope for him to be the man that he used to be.

When another man threatens to take Lilac away, Nick is desperate and selfish enough to pretend he’s fallen in love with Lilac…even though his heart still belongs to the girl who tore him apart

Out Of Line – Jen McLaughlin

I’ve spent my entire life under my father’s thumb, but now I’m finally free to make my own choices. When my roommate dragged me to my first college party, I met Finn Coram and my life turned inside out. He knows how to break the rules and is everything I never knew I wanted. A Marine by day and surfer by night, he pushes me away even as our attraction brings us closer. Now I am finally free to do whatever I want. I know what I want. I choose Finn.

Trying to play by the rules…

I always follow orders. My job, my life, depends on it. I thought this job would be easy, all the rules were made crystal clear, but when I met Carrie Wallington, everything got muddy. She’s a rule I know I shouldn’t break, but damn if I don’t inch closer to the breaking point each time I see her. I’m ready to step out of line. And even worse? I’m living a lie. They say the truth will set you free, but in my case…

The truth will cost me everything