Smash Into You – Shelly Crane

Jude has spent the whole twenty one years of his life running. From what, he wasn’t quite sure. His mother tried to keep him safe; a low profile, a constant move on the horizon, a week’s pay always stashed away. She tried to instill in him that he was special somehow, though would never elaborate. He never felt different. He was so completely normal and vanilla that he wondered if it had all been in her head. But then she was murdered and all he saw was a running silhouette of a man as his mother said three final words to him. Three words that changed his whole being.

Now he’s semi-settled into a big town. The college is huge and easy to blend into. It’s been three months since he had to move because ‘Biloxi’, as he calls the man who killed his mother, found him once more.

Then Marley, an eighteen year old girl who is as infuriating as she is blissfully ignorant of her gorgeousness, smashes into his car with hers. Then smashes into his life as he realizes that whatever it is he has that Biloxi wants, she has it, too. And now, they’re after them both. 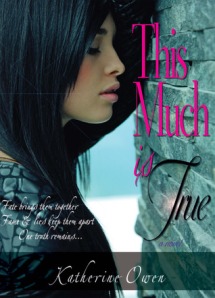 This Much Is True – Katherine Owen

She’s become the Paly High girl with the most tragic story…
At 17, Tally Landon just wants to graduate and leave for New York to pursue ballet. Her best friend Marla convinces her to attend one last party—a college party—where she can be among strangers and evade the whisperings about her heartbreaking loss of her twin that follows her everywhere she goes. She meets Lincoln Presley, Stanford’s famous baseball wonder and has a little fun at his expense—when she lies about her age and who she really is—intent on being someone else for the night and escaping her tragic story.

His only focus is baseball, but he can’t forget the girl he saved on Valentine’s Day…
At 22, Lincoln Presley’s star is on the rise—about to finish at Stanford and expected to be taken early in Major League Baseball’s upcoming draft—his cousin’s party serves as a welcome distraction. But then, he sees the girl from Valentine’s Day that he saved from that horrific car accident and can’t quite hide his disappointment when she appears to look right through him and not remember him at all. He vows to learn her name at least before he leaves. What’s the harm in getting to know this girl? What’s the worst that can happen?

They share this incredible connection, but fate soon tests these star-crossed lovers in all kinds of ways…
And yet, despite the lies being told to protect the other, and the trappings of fame that continually separate them, and in lieu of the deception by those they’ve come to trust the most; one truth remains.

This much is true

Mira and Kylee meet Danny and Skylar during freshman orientation, their first week of college. Two sets of best friends embark on a new adventure together, forming life long bonds.
Mira and Danny are looking forward to their future as husband and wife. Everything was going according to plan. That was until tragedy struck them on graduation night leaving three broken people to pick up the pieces.
Skylar has always stood in the background, watching his best friend begin a life with the woman he fell in love with until he can no longer keep a distance.
Right when Mira thinks her life is back on track it spirals out of control. What if everything you thought you knew was nothing more than a mirage.

After leaving high school, with a hard won diploma and the title of most likely to break hearts, Alexander “Nix” Pierce has left his wild, out of control years mostly behind him. A small inheritance from his grandfather has given him the funds to open up his tattoo shop, Freefall, and he has started to pull his life together. Aside from trying to keep his best friend, Dray, from killing himself in the fight ring, and his slight obsession with a pin-up model he’s never met, Nix’s life is going smoothly . . . until Scotlyn James, the object of his obsession, walks into his shop.

Ever since a tragic accident killed her family and left her alone in the world, Scotlyn James hasn’t spoken one word. Up until now she didn’t care that she had no way of talking to people. Her awful aunt would never have listened, and Lincoln Hammond the arrogant, selfish man who pulled her from the streets of Los Angeles wouldn’t hear her words if she could speak. But when Lincoln insists she get a tattoo to cover up a scar on her side, Scotlyn meets the artist, Nix Pierce. And now she longs for her voice. Now she has found someone who will hear her. 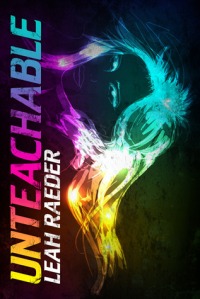 I met him at a carnival, of all corny places. The summer I turned eighteen, in that chaos of neon lights and cheap thrills, I met a man so sweet, so beautiful, he seemed to come from another world. We had one night: intense, scary, real. Then I ran, like I always do. Because I didn’t want to be abandoned again.

But I couldn’t run far enough.

I knew him as Evan that night. When I walked into his classroom, he became Mr. Wilke.

I don’t know if what we’re doing is wrong. The rules say one thing; my heart says screw the rules. I can’t let him lose his job. And I can’t lose him.

In the movies, this would have a happy ending. I grow up. I love, I lose, I learn. And I move on. But this is life, and there’s no script. You make it up as you go along.

And you don’t pray for a happy ending. You pray for it to never end.

3 thoughts on “This Week’s Splurges”