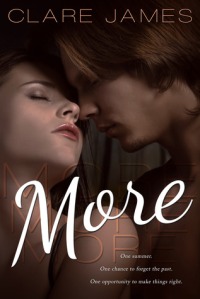 One summer.
One chance to forget the past.
One opportunity to make things right.

There’s no denying the heat between Jules Taylor and Foster Sutton. They are two wild souls with a fire burning inside. Together, they create a hot and dangerous mix of emotion and lust.

But after a terrible accident leaves one friend dead, Foster is bound by a secret that keeps him from getting closer to Jules. And he’s left with only one thing to offer her – friendship.

For Jules, her relationship with Foster is getting old. He falls down and she picks him up, but they never move forward. Their occasional hook-ups are no longer enough, and Jules vows that this is her summer to forget Foster and find love. If it were only that easy.

It seems fate is pushing Jules and Foster together at every turn. And it’s only a matter of time before they give up and give in.

MORE is the highly anticipated companion story to BEFORE YOU GO. It can also be read as a stand-alone book

A few months ago, a lovely lady called Clare James emailed me and asked if I would like to review a copy of Before You Go, her debut novel. Yes, I would love to, was my reply and I loved the book. You can see my review HERE and that Noah was my Mancandy Monday a few weeks ago HERE.

A few weeks back she emailed me again asking if I would love to review More, the story of Jules and Foster. Well yesss, of course I would. I really liked them both in Before You Go and I knew that there story would captivate me just like Noah and Tabby’s did. About three weeks ago (yes a late review) was not a good week for me. I was in a funk; a downer mood and I didn’t know how to get out of it. I decided to pick up More and just pour myself into reading this book, hoping to god that Jules and Foster would help me through it.

Can I just say that they had a helping hand in my downer mood disappearing? And of course I have let Clare know this too. I didn’t want to put the book down. I was reading it wherever I could because Jules and Foster are awesome together. I couldn’t stop reading, More was slowly lifting my mood up and I have to say it included everything. You had sexy times, I cried, I swooned, I loved the strength of Jules, the vulnerability of Foster but I loved that  despite everything in their pasts, they were still ‘friends’ even if they ‘couldn’t’ be together, they still loved one another and were still there for each other.

Clare James makes you care for both Foster and Jules, and you still love Tabby and Noah in the mean while too.

We meet Jules and Foster in Before You Go and I am so glad they got their own story because there is so much to them. They met in high school, becoming fast friends and they have been with each other since. Jules has loved Foster since high school and the older they got, her feelings intensified and her and Foster began a relationship. But one night changed everything and her and Foster broke up.

Foster began to drown himself in alcohol, but what happened wasn’t the one reason why he was drinking, he did something bad, so bad that he cannot tell Jules because it would break their friendship up. Just like it did with Noah and him. He doesn’t feel worthy of Jules but one summer changes everything between them.

It’s a summer of love, forgiveness but also heartbreak and pain. Will Jules and Foster get a happily ever after?

Jules is strong character. You could definitely see it in Before You Go and you can see it in More. She does have a vulnerability to her, but that is where Tabby helped her out, made her go to this unconventional group meeting every week and it helps Jules overcome what happened in her past. Helps her to meet people who have been through loss and self-harming and abuse. For everything Jules had been through, shes a tough cookie, getting through to the other side with her friends there to support her.

Enter Foster. He and Jules have been friends for many years. They were  and to some extent inseparable. Jules has loved him for a long time and although they tried the whole relationship thing, it ended because of Foster and his secret – which Jules has never found out. Jules is always there for Foster, through his boozing and the pain he harbours, trying to make him see that the accident wasn’t his fault, but that’s not why he drinks and he can’t tell her. He uses alcohol as an escape – as escape that he cant ever have Jules the way he wants her. You can see just how much Jules loves Foster, how much she wants him as her own, wants to help him out but it comes to a point where she realizes this will never happen. That she won’t have Foster again and so this summer is all about finding someone new. If only to have what Tabby and Noah have – that true, glorious love. But what about Foster? What does he feel about this?

Oh Foster. He really is a book boyfriend in my eyes. Sexy as hell but a wounded soul. Overcome with the memories of the past and alcohol seems to take that away, if only for a little while. He uses girls to take the pain away too and that is what stings Jules a little bit. Foster loves Jules, he would do anything for her, but in order for his secret to be kept, Noah told Foster to stay away, but he can’t. He needs to be with Jules – and friendship is all that he can offer her despite the fact he would like more. You see him battle with himself over Jules. He wants her but he cant. She wants him but she thinks he doesn’t want her. These two really give you the run around and you can’t help but want them to just be together.

When Jules injures herself, this is when the two of them spend all this time together. You see Foster caring for Jules, you see his jealousy over the guy she works with but you see him making something of himself. Interning in a restaurant and actually doing something he loves. The two of them have 14 nights together, just to be themselves and do whatever they want with each other, before Noah and Tabby come back from their vacation, but what will happen in those 14 nights? And what will happen when the secret comes out? Will it destroy their relationship?

Before i began More, Clare James mentioned a bath scene…can i just say…UH YES FRICKING PLEASE. Hottest scene i have read in a lonnnng while. Dear god, i need me a Foster!!

Anyway, If you have yet to read Before You Go – please do! Read Tabby and Noah’s story, then come back and read More – read about Foster and Jules, because you will love them and want to know more about them when you read Before You Go.