So I asked my very good friend Laura if she would guest post for me this week and of course, she agreed. She wrote about These Things About Us, so here it is…

Hi guys!
When Zoe asked me whether I wanted to do this and tell you how These Things About Us came about, I thought there was nothing for me to tell you. I just sat down and wrote it, right? But then I realized I was lying to myself. Here’s the truth:
Originally, I didn’t want to write These Things About Us.
I only started designing Tony’s character because a friend of mine told me that I kept writing strong, kick-ass female leads and asked why I wouldn’t write a fragile character for once… And – reluctantly – I did. I scrunched my nose and came up with a girl who was vulnerable, who showed great weakness, but I refused to make her weak. I wrote about 20 useless, sucky pages told from her POV just to prove, to my friend but more than that to myself, that I could pull off a fragile character. And damn, I hated it. Because I wasn’t writing something I liked. I was working on an assignment. – Nobody likes doing homework, right?
That was back in January, right after I finished writing a NA college romance.
Long, long before that, Trace had popped into my head. But he didn’t fit into the YA Scifi project I was writing then, and he didn’t fit into that NA college novel. His entire back story, his issues, his secrets were stuck in my head and I just couldn’t give up on him. I wanted to tell his story.
So I kept writing in Tony’s POV in February, having very little (read: no) fun doing so, until one day I figured she might work nicely with Trace, and I wrote the scene of her walking into the bar and Trace hating her at first sight – and I was addicted. There was a story, there were challenges, there was chemistry. And suddenly I liked Tony. With Trace, I could put her in challenging positions. Who he was affected Tony on a level I hadn’t discovered before. And then his little brother popped up and I discovered more and more dimensions to this story.
As you might have guessed by now: I’m a pantser. I don’t plot or plan. And that’s one of the most exciting things to me. Starting a new novel, to me, is like embarking on an adventure and I have no idea what might lurk behind the next corner.
So in the end (and along the way) there’s a lot of revising and rewriting happening. Wanna know a couple of things that have changed between the very first time Tony walked into the Dirty Dungeon and the final version of the book?
Sierra isn’t some blonde Barbie reincarnation anymore. She’s more like the cool, but weird, older sister to Tony.
The title: TTAU’s very first title was “Flightless” but I didn’t like that it was only one word. It then changed to “All These Things About Us” and eventually the “All” was cut off because it simply seemed to long.
Tony is called Antonia. She used to be called Samantha/Sam. (I seriously wanted a unisex nickname.)
And there’s a lot less sexiness going on. I know, I know. I’m sorry for that, guys. I promise to make it up to you somehow, someday. (Maybe in a sequel? Who knows.)
And last but not least: Some major plot points changed and therefore a lot of scenes did, too. Some were tweaked, some added and some deleted.
You’ll be able to read one of those deleted scenes right here on Zoe’s blog tomorrow, along with her review, and there’s gonna be a giveaway! So make sure to come back tomorrow for the official These Things About Us tour stop here at The Book Lovers. 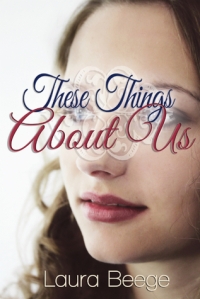 Synopsis
Antonia is leaving the last shards of her life in Tucson behind to find her mother and start over. Turns out that’s easier said than done. London is a pretty big city, a hundred bucks don’t get you far and you can’t just make your past disappear.
When sweet and caring uni student Wesley gets her a job and a room in his father’s pub, Tony is unprepared for his older brother Trace who despises her at first sight. She’s unprepared for someone whose secrets might be darker than her own.
Following a path of breadcrumbs and tangling up in Trace’s past, Tony slips back into a world she thought she’d escaped the day her father went to prison.