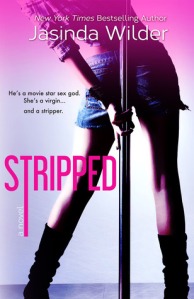 Then, one day, I meet a man. He’s in my club, front and center. He watches me do my routine, and his gaze is full of hunger. Not the kind of desire I’m used to though. It’s something different. Something hotter, deeper, and more possessive. I know who he is; of course I do. Everyone knows who Dawson Kellor is. He’s People Magazine’s Sexiest Man alive. He’s the hottest actor in Hollywood. He’s the man hand-picked for the role of Rhett Butler in the long-awaited remake of Gone With the Wind.

He’s the kind of man who can have any woman in the entire world with a mere crook of his finger. So what’s he doing looking at me like he has to have me? And how do I resist him when he looks at me with those intoxicating, changeable, quicksilver eyes?

I’m a virgin, and he’s an American icon of male sexuality. I’m a stripper, and he’s a man used to getting anything and everything he wants. And he wants me. I know I should say no, I know he’s the worst kind of player…but what my mind knows, my body and my heart may not.

And then things get complicated.

One thought on “Waiting on Wednesday: Stripped – Jasinda Wilder”