So L.M Augustine week kicks off with an interview from the awesome guy himself!

Kicking off the week, we’ll get to know L.M and Click To Subscribe before we do anything else hey 😉 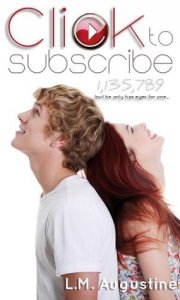 1,135,789. That’s how many subscribers sixteen-year-old West Ryder has on his web vlog series. But he only has eyes for one of them.

As one of the internet’s most prestigious video bloggers, West talks about high school relationships under the name “Sam Green.” As far as he knows, no one from school, not even his best friend, Cat, has seen his videos. But the highlight of the whole thing is Harper Knight, who comments every day at exactly 2:02 in the afternoon. He doesn’t know anything about her aside from the occasional deep philosophical messaging on why pizza tastes so delicious, but as stupid as it sounds, he might be falling for her. So when they finally agree to meet in real life, West’s hope for romance seems more and more in reach. But that all changes as soon as he arrives at their meeting spot and sees Cat walking toward him, wearing the same “I ❤ Sam Green” T-shirt Harper promised she’d have on.

To his alarm, West realizes he is falling in love with the best friend who has always been a sister to him

This definitely isn’t the first book I ever read, but I remember reading Dragon Rider by Cornelia Funke pretty young when it first came out.

Click was inspired after I watched one of John Green’s vlogs where he mentioned that two of his fans met online and hit it off so much that they were organizing a real life meetup. At the time, I thought that was so interesting. I mean, falling in love through social media? I didn’t even realize that happened.

Over time, the idea started to develop, and I kept thinking how plausible that could be. I wondered what those two people would have to be like to fall in love over the internet, wondered what happened to them and how all of it came to be. I’m not sure how the rest came about, but the next thing I knew it was midnight and I was scribbling away the first chapter of what would eventually become Click To Subscribe.

Only a month, actually. The book really flowed out of me.

I really have no idea. Cat and West took over my brain from the start. It was more like they were actually speaking, rather than me “coming up with dialogue,” as weird as it sounds. Their characters just meshed so well that they did the rest of the work! I only sat back and watched. 🙂

5.       Cat and West loveeee ice cream. Did you have a massive tub next to you when you were writing?

I didn’t! But that would’ve been a brilliant idea… because it’s for, um, research. Yeah. Research. (How did I not think of it at the time?!)

7.       West used his videoing as a way to keep his mother in his life, as she was the only one who knew about it. Why did he not want to tell Cat about it? Was it just because it wanted it to be his and his mother’s thing?

I think for West, he just wanted his own thing. I mean, he has always has Cat and he has always loved her in a friend kind of way, but with his mom, he needed something that was just for the two of them–and that was vlogging. He liked having this own part of his life that he could escape to whenever he wanted, because real life kind of sucks sometimes. I don’t think he shared because he liked having his own thing with his mom, and he didn’t want anyone, best friend or not, intruding on that space.

8.       Cat was an amazing character, never giving up on her feelings for West and trying to make him see what was in front of him. What made you write Cat this way? Most YA girls aren’t so strong and confident as she was with her feelings and telling West.

Honestly, I wrote her strong because I was tired of the weak YA heroine trope. Anyone who reads the book can see that Cat is the stronger character–she knows what she wants while West is so conflicted–and I think that’s more realistic. Females are just as often strong characters in real life as males, and plus, it only felt right for Cat and West’s relationship that Cat is the strong one. West is dealing with his mom’s death and she is his support system through and through.

For me, the issue wasn’t so much a jump between genres as it is a jump between characters. NA and YA are much different and I definitely had to change some of my storytelling and book themes for NA, but that part wasn’t very difficult for me. The part that gave me trouble is distinguishing Logan and Cali from Cat and West. They’re very different couples with very different problems, and I sometimes found myself turning Logan and Cali’s banter into something Cat and West would say, which I couldn’t have. Separating them on a relationship level was the definite challenge.

10.   Have you thought about who would play Cat and West if it was made into a movie?

I have, actually! I picture West as a young Austin Butler and Cat as Ariana Grande. Ariana’s red hair is EXACTLY like Cat’s, with the red velvet color and all.

This is how L.M sees West: (Austin Butler)

And this is how he sees Cat: (Ariana Grande) 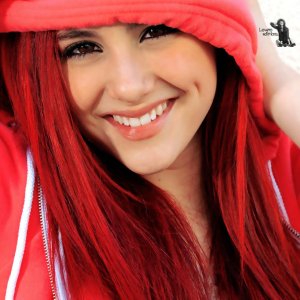 *leans in* *whispers* My deep dark secret, the fate of the world as we know it, is actually– *connection gets cut and secret forever lost*

L.M. Augustine is a YA romance author who is obsessed with writing about dorky teenagers, love, and happy endings. He currently lives in New England, where he spends far too much time reading books and screaming at his computer, and he believes that the solution to the world’s problems can be found in chocolate cake. Click To Subscribe is his first novel, but it won’t be his last.
Find L.M. on:
Twitter
Facebook
Goodreads

And now for your chance to win TWO Ecopies of Click To Subscribe. It’s open internationally, so good luck!!