Today Holly Baker is going to be guest reviewing Savor You by Emily Snow. As I have yet to read the Devoured series, her review has definitely made me add these books to my TBR list!!

Check out her review below 🙂 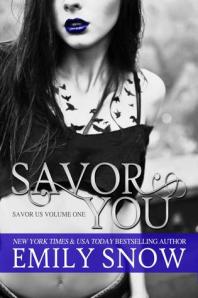 Kylie Wolfe and guitarist Wyatt McCrae have been bad for each other for the last several years, but it’s impossible for them to end their toxic push and pull. Not when their attraction is constantly fueled by lust and proximity—she’s her older brother’s Lucas’s assistant and Wyatt is his best friend and band mate.

So when Your Toxic Sequel makes a move to record a new album in Nashville, Kylie decides to make the latest break with Wyatt official by getting the hell out of town. She’ll spend a week in New Orleans. A week to immerse herself in the Mardi Gras scene. One week to not think about the last time she was in New Orleans, seven years ago with Wyatt. Seven days where she won’t have to see Wyatt every day just to fall ridiculously in love with him all over again—where, if she wants to, she can have a normal, no-strings attached fling that won’t end in heartbreak.

Too bad Wyatt ruins everything by showing up, as gorgeous and demanding and goddamn awful for her as ever.

Wyatt refuses to let Kylie give up on him. Not without reminding her why they both fell so far and hard in the first place. Not without making her savor the good memories and what could be their last chance with each other.

Note: This is a spinoff from the Devoured series.

Savor You is a spin off from Emily Snow’s Devoured series, which I absolutely loved!! I mean, what’s not to love about sexy rock star Lucas Wolfe and his band Your Toxic Sequel? So when I heard that a book about Lucas’ younger Sister and PA Kylie, and his guitarist Wyatt was to be released, my expectations were high. But that’s probably where I went wrong. Because I was left feeling kind of let down by Kylie’s story. Don’t get me wrong, I still thought it was good, but I didn’t love it and I truly hate to say that because I think Emily Snow is a fantastic writer.

Kylie and Wyatt have had a crazy on-off relationship for 7 years. It’s intense and toxic which is never a good mix but no matter how many times they get burned, they keep going back for more. Just as Kylie finally decides to kick the habit and end things with Wyatt for good, he has other ideas. He turns up at the end of her vacation and asks for a few days to try and prove to her why they should give it one last try, by taking her to places that had memories for them, so she could remember why they fell in the first place. Their relationship wasn’t exactly stable, but I loved Wyatt for doing this despite the fact that most of their past encounters were tinged with sadness, they still meant something to him.

There were quite a few aspects of the story that I enjoyed. We find out the meaning behind Kylie’s many tattoos which really made me feel for her and I found myself hoping she didn’t get any more for this reason. The name “Brenna” popped up quite a few times and I really wanted to find out who this girl was and how she came between Kylie and Wyatt at some point in their past, and when her identity is revealed I was seriously surprised and I loved it!! We get to Lucas again and I still loved him just as much as in Devoured and what made me love him even more is that at the end of Savor You, we get to see Lucas’ POV from the end of Devoured and it is awesome!

Two characters that really stood out for me in this book were Kylie’s BFF Heidi, and YTS band mate Cal. I loved these two so much! They really bounced off each other and left me wanting more, so I was really happy when Emily told me that depending on what the fans wanted, she has plans to do books in this series for Cal and Heidi, and Sinjin and a mystery lady. So if you read this book, make sure you tell her how much you loved the secondary characters, and fingers crossed, we will get more.

Overall I found myself wishing for more energy to Savor You, but to be honest, I don’t think Kylie and Wyatt’s story could be told any other way. It wasn’t all happy, hearts and flowers. It was tough. It was intense. It was broken. But it was theirs. Unfortunately it just wasn’t for me. I still love the Author’s writing and I will continue to buy future books from her including this series. I am still very much a fan of Emily Snow and I look forward to reading what she brings out next.

Links to the Devoured series so far:
Devoured (1)
All Over You (0.5)
Savor You (Spin-off #1)
Consumed (2) – To be released in September but you can Pre-Order