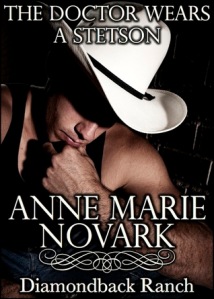 Jessie Devine can rebuild an engine blindfolded, but when it comes to men, she’s all thumbs. When it comes to Cameron McCade, it’s even worse. He stole her heart in high school, then left town for good. Now he’s back and sparks are flying. Can they take up where they left off? Can Jessie risk her heart again? Repairing cars is no problem, but taming Cameron’s restless spirit is something else entirely.

The atmosphere sizzled in the small office. Jessie stood like a statue, her eyes opened wide. “Why did you come back?” Her raspy voice held a note of accusation.

Cameron also heard anguish in her words. Was he causing Jessie pain? When all he wanted was to hold her in his arms, take her to bed and make love to her until the passion between them was spent?

In two long strides, he was beside her. She backed against the file cabinet. He stepped closer.

“You know why I’m back. We need to finish what we started seventeen years ago.” He touched a finger to her cheek, traced the smooth line of her jaw, eased his hand behind her neck and pulled her to him. Her trembling intensified and she put her hands on his chest as if to ward him off.

He caught her hands and moved them over his heart. “Feel my heartbeat, Jess. It’s beating for you.” He pressed his body against hers. “Feel how much I want you. I tried to stay away, but God help me, I couldn’t.”

His mouth claimed hers in fierce desire. Jessie moaned, holding back only for a second, knowing deep down resistance was hopeless.

She couldn’t help it . . . she kissed him back
(From Goodreads)

17 years ago, at 15, Grease Monkey Jessie was asked out to a high school dance with Cameron McCade. The guy she has always had a serious crush on. After having a great night, he stole her heart but after that night he finished school and left town for good, leaving Jessie broken-hearted, even though it was only a few hours, she felt that spark and she knows he must have too.

Now 17 years later, and after nursing a broken heart for the death of her parents and her husband, Cameron is back in town for a couple of days and seeing him brings back all her old feelings for him…feelings that never went away. But can she got there? She’s filled up with guilt but her feelings are so strong for Cameron that it’s hard to resist him. But how long can she resist him for before she gives in?

Cameron had a plan in high school. To get out of the small town and become a Doctor. And that is exactly what he did. He never really comes back to his home town but he’s been offered a promotion at work and it’s his mother’s birthday so he’s back in town for a few days. Never did he think seeing Jessie again, working in her father’s garage would spark his old feelings for her, but they did and now it’s time to try and get Jessie to agree to start off where they left off 17 years ago.

I have an obsession with reading about Cowboys. I’m not sure where this stemmed from but I want to go to Texas, just hang out on a ranch and ‘bump’ into a sexy cowboy who wears a Stetson, has his top off and sweat glistening off him, has a sexy accent and a pick-up truck….*goes off into a dream world*okay, I’m back. So when I found this little gem on Amazon, 1-Click called out to me and I read it within a couple of hours.

Okay, so Cameron isn’t exactly a cowboy, but his family live on a ranch and he wears a Stetson so that is good enough for me.

So it’s the first book I have ever read by Anne Marie Novark but it certainly wont be the last! I will be downloading the next few books in the series as they focus on the other brothers in the family and their love life’s too. From reading the synopsis and the excerpt on Amazon, I knew it would be a great book, and I wasn’t wrong. Ms. Novark had me engrossed within the storyline, wanting to know every little bit of Cameron and Jessie and of course, the supporting characters who were there for both Cameron and Jessie. It was a fun, sexy and sometimes frustrating book to read (In a good way) and it has paved the path for me to read more about the sexy McCade brothers now. More Cowboys!!

As mentioned, the book starts when Jessie is 15. She’s an utter Tomboy and helps her dad out at his garage. She’s a grease monkey, so when Senior Cameron McCade asks her to his prom, she hesitates until he begs her to go with him. She accepts, buys a gorgeous dress and goes to the dance with him.

She may be a little young and inexperienced, but that night up on Lover’s Point, she gave her heart away to Cameron only to have it broken in two when he left the town straight after high school.

For 17 years, Cameron has been at the back on Jessie’s mind. She’s had to change up her life after her dad became ill and died. She got married and then became a widow when he died too. So her life hasn’t been the greatest and now, after trying to safe her dad’s shop, she has the dilemma of running out of money. When TR died, she inherited a piece of land on the McCade’s ranch and although she promised Cameron’s mother she wouldn’t sell it to the big oil companies, now is the time where she is in a rut. She feels guilt and doesn’t know what to do.

Cameron McCade hardly ever returns to the small town he grew up up. He’s not a busy Doctor and really doesn’t have time. His plan for to move away and that’s what he did. But his life isn’t all the fulfilling anymore and when offered a promotion, he is given time to go away and think about it. So he returns back home to think on it and visit his family as it’s his mum’s 60th.

Pulling up outside Jessie’s shop with his flash car in tow, he needs it fixing and when he sees Jessie still in town, working at the shop, all his old feelings for her spring back and he knows now, that is needs to start back up what they began 17 years ago.

But with obstacles along the way, guilt eating up Jessie and Cameron’s careful planning going to shreds, will they get their happy ending?

I kind of felt sorry for Jessie throughout the book and at times annoyed and frustrated with her – But then I kind of understood, a tiny incy bit, where she was coming from. But not a lot to want to strangle her and tell her to go with her heart. She had her heartbroken at 15 to Cameron McCade and over the 17 years has seen fleeing sights of him. She had to leave her dream of going to college  behind when her father became ill and when he died, she took over his garage and has been working there ever since. She is also widowed but she feels utterly guilty for not loving him the way a wife should. She also feels guilty for not being able to give him children and she also keeps turning down Cameron because of a promise she made to TR before he died.

All of this weighs on her so much so, that you just wanted to shake her and be like “PLEASE just stop it. You love Cameron, always have done but TR is dead and you need to stop living in the past and live for the future.”

You do feel sorry for her. The guilt is enough to make anyone down and although when she does get over it and realizes nothing is her fault, she is a bright and bubbly girl who loves being with Cameron.

She bloody well goes through a journey. You see her at 15, see her lose her heart to Cameron only to have him break it when he leaves. Then he’s back and she feels all the feelings rush back to the surface, having never gone away. The thing that annoyed me was that she let him back into her life too easy, but then I suppose, they didn’t know each other that well when they were younger and only spent a few hours together, so maybe it was easy to slip back into the ‘friendship’ mode and act normal, even if they hadn’t seen each other for many years.

It really was nice to see the chemistry between the both of them. To see they really should be together and finish off the rest of their life, just like it start 17 years ago, even though they were both to young. 17 years is a long time to be apart, but they flowed right back into how they were when they were kids and i suppose all that time just drifted away and it was like they were never apart.

Cameron McCade has always been a planner. At 18 he had his life planned out. Get out of the small town, go to medical school and become a Doctor. And that is exactly what he did. He didn’t want to become a rancher like his brother and father, he needed out. He left straight away after high school, not even saying goodbye to Jessie as he was scared of his feelings for her and since then he has hardly returned home.

Coming back home for his mother’s 60th and to think over his promotion, he hangs out with Jessie a hell of a lot. Being with Jessie is changing something in Cameron, which was really nice to see as you realize he really does plan his whole life. Being around Jessie makes him not want to plan his life anymore, she makes him calm, different, and perhaps a little scared as he had never felt this way about anyone.

I loved how determined Cameron was to make Jessie see that they have this amazing chemistry and are good together – that they should continue what they started as kids. He never gave up on pursuing her, knowing that she really is The One for him. He goes through his own obstacles during the book such as his feelings for Jessie, how he doesn’t have a plan for once but he kind of likes it. It was really nice to watch him change and grow along the way too. The fact that he loves Jessie so much to switch up his life, well that just made me smile a lot.

There are a lot of barriers along the way, which could have easily been straightened out and a lot of blind sighting from Jessie and Cameron which also could have been straightened out if they both just cut to the chase of what they were hinting and their feelings for one another. They are eventually sorted out but I felt that if they both just said what they meant in the first place, a lot of what happened wouldn’t have dragged on.

Jessie and Cameron do get a HEA though and I cannot wait to see cameo’s of them in the next couple of books.