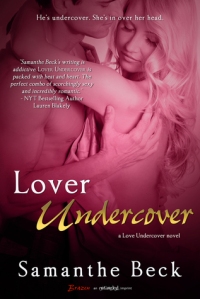 He’s undercover. She’s in over her head. Yoga instructor Kylie Roberts is the good twin. At least she was—until an accident forces Kylie to step into her twin’s sexy stilettos at a posh Hollywood “men’s club.” But nothing could’ve prepared Kylie for the dead body in the club’s parking lot or the ridiculously hot detective who insists the killer is targeting her regulars.  Detective Trevor McCade needs Kylie’s help to draw out the killer. It means long nights undercover and long dances where Kylie’s body tempts him with sensual promises. Dances that leave them both wanting more. But despite Kylie’s hidden identity and the danger lurking in the shadows, it’s only a matter of time before Kylie and Trevor take this undercover operation under the covers…

Kylie and Stacy Roberts have been joined at the hip since forever, well they are twins. People back in their home town always had expectations that they were never amount to anything especially Stacy who is deemed the ‘bad’ Robert, so why not live up to that reputation. When they were old enough to move away and try to prove them wrong, L.A came calling.

Kylie is the ‘good’ sister and is a yoga instructor, focussing all her time and effort on her job, which means romance and dating has taken a backburner since…well forever. When her sister is involved in an accident, Kylie is forced to step into her twin’s shoes at a posh Hollywood ‘men’s cub.’ Cursing her sister for making her pretend to be her so they can pay their rent, Kylie couldn’t have imagined she’d find a dead body after her first night or that a smoking hot detective insists the killer is targeting her regulars.

Detective Trevor McCade needs Kylie to help him with the investigation to make the killer strike out again…at him. This means long nights undercover at the club and long dances where Kylie’s body seduces him into a frenzy. Her dances are leaving both of them wanting more and it’s only a matter of time before Kylie and Trevor take this whole undercover service under the covers.

After reading Private Practice by Samanthe Beck, when I saw this book was by her and when I read the synopsis, I clicked ‘request’ and was so happy when I received an email to say I was approved to read it. Gosh, I loved every single moment of reading this book. Samanthe keeps you in tenterhooks, with the investigation, wondering who the killer is, to Kylie’s journey and discovering it’s okay to have people help you and to open yourself up to romance and of course, the ‘undercover’ romance between both Trevor and Kylie- hot, hot, HOT!! Swooooosh!

Samanthe Beck’s writing is engaging; it draws you in so you have to keep turning the pages and its all kinds of sexy and informative – with the police investigation and the sexy scenes. With the investigation and how it was handled, it seemed that Ms. Beck has done her research on how victims should be handled and treated, how secret you must be when undercover and how fast you must react when the killer strikes. Although there are obvious some scenes that in no way would be allowed to happen, it all added to the fun of this book. It all interested me until the very end and I had many different men on my list of suspects. I can guarantee you probably won’t guess who it is…I sure as hell didn’t.

When her twin sister Stacy breaks her leg, she cons Kylie into pretending to be her until its healed as Stacy is technically the one earning the money to pay their rent. Kylie isn’t happy at all, not wanting to pretend to be her sister and to be a stripper but if they want to stay in their house, its something she has to do. Kylie is literally the sweetest character you can imagine. She’s taken a backburner on the dating scene because her mother royally screwed up around men and with her bad parenting, whereas her sister went the other way, screwing men then leaving them, not thinking she is good enough for a relationship.

Kylie is loyal, bright, determined and straight-thinking, yet she’s fiercely independent and doesn’t like the thought of a man coming between her and her dreams of opening her own yoga studio. Because of her mother, who was so dependent on men, it’s turned her the other way to not want a man and to not let him stop her in any way. I kind of admired that about her, yet it annoyed me too. Being in a relationship, you can still have you independency whilst leaning on them to help you with your dream. But I think with her up-bringing it just made her cautious and that is why she was the way she was.

Trevor is a detective who has recently been given a case suddenly has a link when a stripper is seemingly connected to the two men who have been beaten to death. The two men who were regulars of this stripper. Both loyal to Stacy. But with Kylie pretending to be Stacy, its Kylie who had to keep up appearances and who is slap bang in the middle of this investigation into finding the killer. Going undercover, Trevor knows that the more time he spends with Stacy (Kylie) the more he is falling for her but first he needs to know what she is hiding.

Trevor is a loyal character, he’s lovable, a hard worker and protective. He also has a big heart, and the way hes attracted and falling for Kylie is just so sweet, even when he finds out the truth. He wants to be there for her, prove that not all men will ruin your dreams, he especially will help her at any costs to achieve hers. His protectiveness for Kylie throughout catching the killer pulled my heartstrings. He would do anything for her, to make sure she is safe. He is such a cutie.

The attraction that Trevor and Stacy (Kylie) have is instant. They both feel the pull, the need to get closer to one another and when Trevor is the detective on scene of the death of a man Kylie found, that first proper meeting he is there every step of the way with Kylie, both undercover and in real life. You can see the chemistry and that Kylie feels nervous around him…well she is lying about who she is…but also shes never felt the way she does for ANYONE and now Trevor has turned her into this gooey mess. But she’s also turned him into this gooey mess, especially when she dances for him in his undercover-ness. The more he has to pay for dances and pretend to become a regular to get the killer after him, the more its becoming harder for the two of them to not jump one another and just have sex right then and there in that private room as the dances were particularly steamy!

That epilogue. Holy shit, it reminded me of another book in some ways, but I’m not going to mention what book as it could potentially spoil the ending, but dear god, let me find a guy to do that please! Or let me be Kylie so I can have Trevor. It was the perfect ending and perfect for both of them to be ended like that in the book.

I thoroughly enjoyed this book. There is a lot I haven’t mentioned, but I want you to read it yourself to find out what occurs. I have given you the bare minimum to at least catch your attention in reading Lover Undercover and I truly hope it makes you want to buy it when it comes out!

Pushing aside the investigation and the sexy scenes, Lover Undercover takes Trevor and Kylie on a journey. More Kylie really. It takes her on a journey of growing up, of self-discovery, of love and acceptance and a journey that not all men want you to give up your dreams; you just need to find the right one who will support them. From being a shy women to growing up and blossoming into a confident women, who now knows what she wants.

If you loved Private Practice, you will definitely love Lover Undercover too!