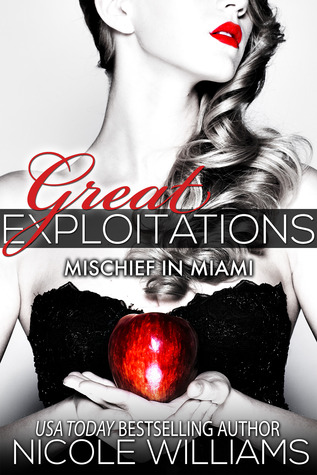 Seduction. Infidelity. Blackmail. Scandal. It can all be bought for the right price and for Sienna Stevens, business is good.

Because she’s in the business of Great Exploitations.

She’s an Eve, a member of a secret society of women contracted by the wives of wealthy, powerful men for one reason and one reason only: to seduce their husbands. To ensure their pre-nuptial agreement will be null and void thanks to a little loophole known as the Infidelity Clause. To ensure that those wives don’t find themselves on the other side of a divorce without a penny to their name.

When it comes to the Eves, Sienna’s one of the best because she follows the number one rule of the Eves to the letter: don’t let it get personal.

When the job file of her wealthiest client yet falls into her lap, Sienna realizes that this case could be the one that’s impossible to detach herself from. The payout would lead to her independence, but will the cost be too high in the end?

I absolutely love that cover. It’s stunning and really reminds me of Eve, from Adam and Eve – which I suspect is exactly what it is. The rosy red of the apple has never looked so tempting and taking a bite? Ohh honey, such the wrong thing to do, but staying away, you just can’t. You have to take a bite. It’s too tempting.

That is exactly what Great Exploitations is about. Tempting the married man to have a one-night stand to ensure that the pre-nup they made their wives have, is now null due to the Infidelity clause. Not only do the wives get a share of the money, so does the Eve and the business.

Great Exploitations is the first in a novella series. The main character goes by Sienna in this book. She is a Eve – a member of a secret elite of beautiful woman hired by unhappy wives of cheating, rich men to seduce and sleep with the husbands who have made them sign a prenup. If they divorced them, they would get nothing, but catching them in the act? Well, they will get half of their husbands money due to a little thing in the prenup called The Infidelity Clause.

The agency is owned by ‘G’, who scouts for her Eves and transforms them into the seductive women they are today. G scouted Sienna five years ago, and turned her into the temptress she is today. ‘Sienna’ or whomever she is, is one of the top Eves. She puts a lot of effort into her job; from nitpicking every little detail about the Target, to transforming herself into his perfect woman, to making sure she has his complete and undivided attention on her so she can get the job done.

She’s good at her job and that’s how she wants to keep it. Sienna seems to have no emotions attached to her. She treats sex as sex. No feelings before or after. It’s like shes a robot. Programmed to do the steps to hook line and sink the Target. To make sure they are caught and the wives get the money that they deserve when they are shown the pictures the P.I’s take of her and the target.

The men are tagged by how much money they are worth by the number of zeros in their bank account. Eights and Nines are pretty great but a Ten? That is rare but if one does come around, it’s a complete goldmine. A Ten for Sienna would give her the freedom she is looking for and it would set her up for life having all that money in her account.

It’s a short book, at only 90 pages but there is so much information packed into it. Nicole Williams takes you through a journey about who the Eves are, what they do and how hard they work to make sure their job is done and dusted to perfection. There is a lot of hard work put into being an Eve.

It is a quick read, but one I thoroughly enjoyed. It was brilliantly written, and the concept was such an interesting one to read. You won’t want to put it down and from that ending? The rare Ten? Oh I cannot wait to read the next novel in the series. It really leaves you wanting more and wanting to know all about Sienna’s past and her ever-growing closeness to her freedom…whatever her freedom really is.