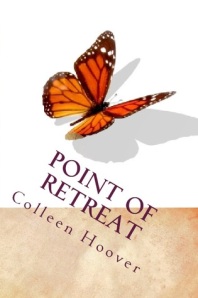 Hardships and heartache brought them together…now it will tear them apart.

Layken and Will have proved their love can get them through anything; until someone from Will’s past re-emerges, leaving Layken questioning the very foundation on which their relationship was built. Will is forced to face the ultimate challenge…how to prove his love for a girl who refuses to stop ‘carving pumpkins.’

Point of Retreat picks up from where Slammed ends. If you haven’t read Slammed, don’t read anymore of this review, as it will tell you what happens next in Lake and Will’s life.

After Julia’s death and the hardships to get to where they are now, Lake and Will are together, with nothing to keep them apart anymore. Lake and Will have proved that love can concur all, and they have waited so long to be together. The four of them are now a little family and although Julia is missed every day, they get by; with the love they have for each other.

But when someone from Will’s past emerges, she seems to do more damage than good and when Layken watches an interaction between Will and that person, it devastates her and leaves her questioning and doubting everything about their relationship.

With Lake heartbroken and not listening to a single word Will wants to say, it’s up to Will to prove just how much he loves this girl and how he can’t live without her. And with the help of his new neighbour, he’s determined to make Lake realize just how much he needs and loves her. Will he succeed in getting his soul mate back?

Colleen Hoover is perfection. Utter perfection. Oh Point of Retreat has my emotions all over the place. I was smiling, I was cursing, my heart fluttered, I was angry and I was in floods of tears. WHAT.A.SEQUEL! I couldn’t put this book down either.  In Slammed, it’s about the forbidden relationship, the love but also about the loss of the one remaining parent between them both – Julia. Point of Retreat shows us the bind that both Will and Lake have, not only losing both parents, but having to bring up their respective brothers. But more than that, their love and connection that binds them together is also foremost in Point of Retreat too. Their determination to be together, to stand strong together and still try to be the young adults they are whilst helping each other find that balance between being parents and still acting their age.

With Julia’s death, Lake and Will have more in common, dealing with the heartbreak of another family member’s death, but could this be something that could tear them apart? Having so much in common? With them both attending college, yet on different days, Will encounters a blast from the past that he would rather forget about, but since she’s in his classes, he can’t.

Enter Vaughn, the ex-girlfriend who deserted him when he needed her the most. Deciding it’s probably best not to tell Lake about her being in his class, Vaughn wants Will back after coming to her senses and realizing she threw someone as amazing as Will away. But no matter what Will tells her, that he loves Lake, Vaughn hits him with a hard blow and asks him the question: What if he’s only with her because he knows how it feels and he feels sorry for her?

After a confrontation and witnessing something so heartbreaking, Lake takes that question and turns it into something that could ruin their relationship forever. Yes, they have the loss of parents, the bringing up their brothers in common but is that why he loves her? Lake is planted with doubts over his love and tells him he can have days, weeks, even months to think about why he loves her. Months? Like he needs months to tell her but if only she would listen and not block him out, then he could tell her how much she means to him. So what does a guy like Will do to prove him love? Slam Dunk with poetry of course!

But with their love back on track, something even worse is coming their way and now it involves everyone. It’s times like these where this small close family of friends need to stick together and pray that it will all be okay.

I felt every single emotion when this happened – around the 75% mark. Will was frightened, he was scared, he was tired of waiting, not knowing what was happening, but he had to be strong. I cried so much during these few chapters because I hated seeing Will hurting so badly and I just wanted to crawl into my kindle and give him a hug and console him. His love was so strong and powerful that he would do whatever it took to make sure Lake was okay.

Lake kind of annoyed me when she began questioning Wills love for her, but in a way, I could see where she was coming from. They had so much in common at such a young age, that it could be seen as just being together for the sake of this, but in Slammed, they overcame so many obstacles to be together and proved that even when they weren’t together, their love couldn’t be vanquished. I know that now Lake has had to grow up after losing her dad and now her mum, and with Will already knowing what it’s like, their love could be built on that foundation, but even when she’s not here, Mama Julia knows best and is still there in spirit and there with her advice and wisdom to guide both of them through the hard times they are both experiencing.

And she of course, has something for every scenario and feeling both of them are going through, to prove that they can get through anything together. The lyrics, quotes and wisdom throughout the book gave it so much depth and meaning and each one integrated into the scene that was happening with grace and gave a whole lot of emotion back.

I loved the determination of Will to make everything right again with Lake, to prove that their relationship isn’t just based on the factors they have in common, that it runs much deeper than that – about the little things about Lake, her personality, their favourite band, the booth they shared their first Slam together. He poured his heart out during his Slam to win her back and prove that he was so in love with her; everything about her that who cares if they have deceased parents and brothers to look after, he loves her despite those factors.

Point of Retreat was in Will’s POV and I absolutely butterflying love it when authors write in the guys POV because so many are in the females’ that you have to guess their feelings and go off from what the girl is saying. HOLY SHIT! This book made me fall even more in love with this god of a man. I love that we got to see his true feelings, his emotions, his love and his fears come through. He wasn’t a guy afraid to show anything, he bared his soul, and of course, his soul is also bared through his poetry which is why he is so passionate about it. Can’t wait to read the third book which will also be in Will’s POV 😀 WOOP WOOP!

Gavin and Eddie are heavily involved within this book and I love them as much as I did in Slammed, as are my favourite boys Kel and Caulder who are now 11. Oh my boys are growing up! But two new characters in the form of Shelly and Kiersten, the new neighbours are brought into the book.

Oh Kiersten! She’s the boy’s age but well old before her time. I loved her wisdom and advice, which she had obviously inherited from her amazing mother Shelly. She and the boys are really close and they protected and stuck up for her when things in school weren’t going too well, but she never once had a sad smile on her face, she was always happy and always happy to help, much the same as Shelly who was like the adopted mum to Will, Caulder, Lake and Kel. She was there with advice and medicine when they all got ill. It was great to see that even though Julia had gone, they had Shelly to go to.

This close knit family of friends were always there for one another, through thick and thin and you could see how much they loved one another and would help out whenever they could.

I can’t say how much I love this series and Colleen Hoover. This series is perfection. Its powerful, its full of love, its full of amazing poetry and quotes that integrate within the situations at hand and it’s about finding that one person who will own your heart forever, even though the hardships and it’s about loss. I can’t wait to read Slammed from Will’s POV now when it’s out later this year. I can’t get enough of Colleen’s writing. She has be hooked from the beginning, the book begging me to keep going until the end and not stopping till I’ve finished. Read Slammed and then this book – you will not be disappointed and I assure you, you will fall in love with Will and Lake and everyone else involved in this series! I butterflying LOVE IT.

One thought on “Point Of Retreat (Slammed #2) – Colleen Hoover”