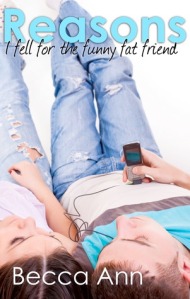 It’s stupid to fall for your brother’s ex. It’s even worse to enlist another’s help to win the ex over. But Brody is desperate and Hayley, his partner in American Sign Language, is more than willing to lend him a few tips.

She’s the school’s matchmaker,’ and with her bizarre and positive personality, Brody finds her easy to talk to, even about the most awkward situations. Hayley’s tips seem to be working, but as Brody learns more about his matchmaker, he starts finding reasons to spend time with her, and not the girl he thought he was in love with.

But Hayley isn’t ready to fall for anyone. Labeled the “Funny Fat Friend” within her group, her self image makes it impossible for Brody to share his feelings without Hayley shrugging it off as a joke.

Convincing her Brody can, and did, fall for the “Funny Fat Friend” turns out to be harder than simply falling in love.

Brody and Hayley are partners in their American Sign Language class and although they hardly know one another, they seem to get on pretty well. Brody’s brother’s ex-girlfriend is also in the class, and when Hayley lends him a hand in trying to win Quynn over, he wants to spend his time with Hayley- not trying to win Quynn over.

He and Hayley spend a lot of time together, she’s easy to talk to, makes an awkward situation not so awkward and she has the best personality ever…but she isn’t ready to let go and love someone. She’s labelled the FFF “Fat Funny Friend” and she has no confidence in herself at all. Can Brody convince her that he really has no feelings for Quynn and that he wants her?

I loved both Hayley and Brody. They were great characters, with prominent voices that made me feel closer to both of them when they were going through turmoil throughout the story. Their banter and conversations were so funny and it felt exactly like how two friends should act together – they were having fun and slowly learning more about each other and becoming best friends fast – with the added feelings they had for one another down the line.

Hayley hasn’t had much luck on the boy’s side. She’s been labelled the Fat Funny Friend and in the past when she’s thought guys liked her, they have just used her to get closer to her friends. It doesn’t help when your mum wants you to change yourself too, hence having no confidence in her appearance at all. She has a bubbly and bizarre personality that no one can ignore and as a reader, you become engrossed in her personality and I really saw some of myself in Hayley. I think her personality stems from being labelled the FFF and being used but even if I’m wrong, there is no way those guys who used her could have done that, she was a gem and a sweetheart and I would love her to be my best friend and I would totally hook her up! But I’m glad she had Brody, he saw her, for her and liked her, regardless of her appearance. He fell hook, line and sinker for her and getting her to believe took a while, but I could understand why and when you read it, you will to.

Brody – albeit wanted to be with Quynn at the beginning – had me loving him from the start. When he and Hayley began to constantly hang out and when he realized that he didn’t want Quynn anymore and it was Hayley he wanted, ohh how I wanted to fist-pump him. He was there for Hayley through everything she went through and although it was hard for her to open up to him, he waited until she was ready to tell him what was up.  I enjoyed how it was in Brody’s POV. I hardly ever read books where it’s in the guys POV but with this book, I loved it! It was refreshing to see/read how Brody dealt with his feelings for Hayley and her insecurities instead of it being in her POV throughout the book, never understanding Brody’s feelings for her, but his voice shone through and you could tell how much he liked Hayley and how much he wanted her to know that he didn’t care if she was fat, he thought she was the most beautiful girl ever and he just wanted her to believe him and be with him too!

Although at times he bugged me over his dilemmas between Hayley and Quynn. I understand that he wanted to get with Quynn, his brothers ex at the beginning, but the more time he spent with Hayley, the more he wants to spend time with her and he’s all cocked up over both of them, even though Hayley seems to dominantly wins every time. I could really see her hesitations when Brody tries to convince her he really does like her – as she’s been helping him try to get Quynn. I really did want to slap him at times but I suppose, when you’ve been crushing on one person for a while then another comes along and completely steals your thoughts then it’s going to be confusing, I’m just glad he sorted his feelings out and you could see they were genuine.

The ending was super great! He FINALLY manned up – you will see why I say this – and everything worked out perfectly for them. They are the most amazing and funny couple I have read and they definitely deserve to have one another because their chemistry is fantastic, their banter is off the scale and they truly do love one another. AWESOMESAUCE!

If you’re looking for a funny, fluffy and cute story, then Reasons I Fell for the Funny Fat Friend is definitely the one for you.