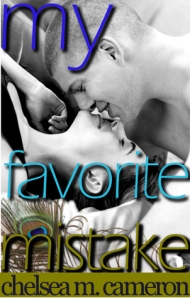 Taylor Caldwell can’t decide if she wants to kiss her new college roommate or punch him.

On the one hand, Hunter Zaccadelli is a handsome, blue-eyed bundle of charm. On the other, he’s a tattooed, guitar-playing bundle of bad boy. Maybe that’s why Taylor’s afraid of falling in love with him, or anyone else. She doesn’t want to get burned, and even though her other roommates adore him, she wants him gone before it’s too late.

Hunter himself has been been burned before, but the fact that Taylor calls him out on his crap and has the sexiest laugh ever make him decide maybe love isn’t a lost cause. They make a bet: if she can convince him she truly loves or hates him, he’ll leave the apartment–and leave her alone. The problem is, the more time they spend together, the less she hates him, and the more she moves toward love.

But when the man who holds the key to Taylor’s fear of giving up her heart resurfaces and threatens to wreck everything, she has to decide: trust Hunter with her greatest secret, or do everything in her power to win that bet and drive him away forever.

“It doesn’t seem like enough. Seeing your face when you opened it makes me want to buy you a million  things just so i can see that look every single day”

Taylor isn’t happy to see a guy at her doorstep claiming that he’s her new roommate. It means that he has the bed in her room as the other room is occupied and that is not going to sit right with her at all. Seeing as there is nothing anyone can do, Hunter, the new roommate, proposes a deal. If she can prove she hates him, loves him or has sex with him, he will move out and they will never see each other again.

BUT he has the deciding vote to see if she is telling the truth or not. Taylor is determined to prove that she hates him, but the more time they spend together, the more the lines are blurring and love is slowly creeping in.

I have to be honest and say I didn’t exactly warm up to Taylor from the start. The way she behaved when Hunter was at the front door really annoyed me. She could have handled that situation better if she didn’t go off on one. Yes, I understand that it was meant to be a girls only flat and yes, having to share a room with a guy would be totally uncomfortable, but come on, it wasn’t his fault he got placed in the flat and the other two girls seemed more than okay with him living with them – even suggesting to switch rooms with her.

For someone to act that way when they have never met someone, it just didn’t sit right with me. Sure Hunter is cocky, but as Taylor said, she could see he wasn’t like that all the time, but still she was an absolute bitch to him. I suppose once you find out her secret, it makes sense why she was uncomfortable but still, it’s not an excuse to be rude. Saying that, I did warm up to her in the end and really did sympathize with her ways, especially as you can see why she is so afraid to fall in love and be with anyone…until Hunter.

I loved Hunter the first time you read about him. I would be more than happy to have him live with me and share my room! He’s a gorgeous, cocky guy who has five tattoos and plays guitar, yet you know that it’s just an act as he too, is hiding a big secret that he doesn’t want Taylor to find out; no matter how hard she pesters him about it. You can really see the attraction between Taylor and Hunter, and Hunter, even though he hides behind this façade, he really is sweet and kind and sensitive and would do anything for Taylor as he truly wants to be with her, even when he kept going “I don’t like you.” He’s a cheeky chap who speaks his mind and that completely scares Taylor. Yet Taylor is completely different to the type of girls Hunter sleeps with and that scares him too.

As I’ve mentioned, they both have big pasts they don’t want to share but when they do, it brings them closer to one another. They both help each other through their traumas, especially Hunter with Taylor’s, and he shows her that nothing can hurt her anymore and he shows her how much he loves her – more than the stars. I do have to say, their bickering and banter really made the book for me. It was hilarious and sexual and everything I love to read between two characters who are trying to hate one another.

The only downside was how long it took for them to sort their acts out and get together, but in no way is this book boring. They really are meant to be together and when they have sex for the first time, it was perfect for them. The perfect moment to become one and to share their feelings. They do go through some problems, albeit they work through them together and get past them with each other’s help which I loved. This book is really refreshing to read as lately I have been reading a lot of YA/NA with some much drama in, my heart couldn’t take it anymore, but this book was a wonderful read for a lazy New Years Day.

The ending was great! It left room to stand alone or to be expanded and become another book. I for one, vote for another book. I’d love to see more of Taylor and Hunter’s story, but if there isn’t another book, I am satisfied that everything fell into place for them. Hunter is my new fictional boyfriend!

Definitely give My Favorite Mistake a read 😀