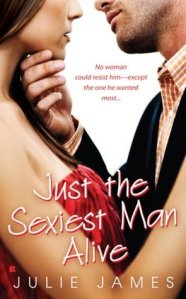 No woman could resist him—except the one he wanted most…

Nothing fazes Taylor Donovan. In the courtroom she never lets the opposition see her sweat. In her personal life, she never lets any man rattle her—not even her cheating ex-fiancé. So when she’s assigned to coach People’s “Sexiest Man Alive” for his role in his next big legal thriller, she refuses to fall for the Hollywood heartthrob’s charms. Even if he is the Jason Andrews.

Jason Andrews is used to having women fall at his feet. When Taylor Donovan gives him the cold shoulder, he’s thrown for a loop. She’s unlike any other woman he’s ever met: uninterested in the limelight, seemingly immune to his advances, and shockingly capable of saying no to him. She’s the perfect challenge. And the more she rejects him, the more he begins to realize she may just be his perfect match.

“Seriously, Taylor – do you know who I am?” He demanded. She smiled at this ” You celebrities actually say that? That’s cute.”

Taylor Donovan is living in L.A for a couple of months while taking on a sexual harassment case. She’s calm, collected and focused on her career and she can definitely give as good as she gets with everyone. But when she’s assigned to coach People’s ‘Sexiest Man Alive’ Jason Andrews, for his next big role in a legal thriller, she is refusing to fall for the heartthrobs charms. Even if it is THE Jason Andrews.

Jason Andrews is used to girls throwing themselves at him, so when Taylor doesn’t bat an eyelid, he’s intrigued and a bit thrown about it. No one has ever given him the cold shoulder; all the women he’s met haven’t resisted him…until Taylor that is. It doesn’t help that he blew off two appointments with her, and that is why she’s less than thrilled to be working with him but the more time they spend together, the more Jason seems to be breaking Taylor’s stance down bit by bit and the attraction is clearly showing from both of them, but the games being played are keeping them apart.

Taylor is such a character and it’s hard not to love her. You would feel exactly the same if you had to clear your schedule with a big court case coming up just to fit in Jason Andrews, only to have to cancel TWICE, when she could have been focusing on her case. When they do met, she definitely brings him down a notch or two, and that’s when you realize that she’s not in to being charmed by a Hollywood heartthrob, even if he is sexy and she’s not thrilled that she has to help out Jason Andrews for his role. She thinks it should only take a couple of days to help him out, but what if he wants it to last longer…?

Jason is a thirty-something Hollywood actor and has been voted ‘Sexiest man alive’ for god knows how long. He knows how to charm the ladies and has seen a lot of action over the years. He knows that one look at him and the panties are dropping. It was easy to dislike him at the start, as his ego is massive and his character is everything that hits the Hollywood stereotype you read about. But when he meets Taylor that is definitely not the case. You start to see the more time they spend together, the more Jason is easing back into the ‘real world’, a world where he wants to prove to Taylor that he’s not the guy that everyone thinks he is, and he really has changed, because he wants to be with her. He’s stopped feeling emotions for years, but around Taylor, all these feelings he’s hid away re-service and the bad boy is reforming, just for Taylor.

The chemistry between Taylor and Jason is blatant from the first meeting, where Taylor knocks him down a notch. The more time they spend together, the more the sparks are lighting up between them but they still do nothing about it apart from trying to make each other jealous to see if the other does, in fact, feel something. The cat and mouse game added to the intensity of them both, but I was shaking my head and telling them both just to stop with the games and just admit their feelings to one another.

I have to say, I loved the part where Jason, who was filming, drops everything when Taylor gets into an accident. It was such a perfect example of how much his walls had dropped and how his emotions were coming back to life for this girl that he would do anything to be around her and keep her safe.

I really did enjoy this book. From the title, you think it’s all about sex, but alas, there isn’t a sex scene, more Julie James telling us where they had sex, but no description of any sex. The story was great and it was a fun romance book to read, which included breaking down barriers, jealousy and finally finding that one person who is perfect for you.