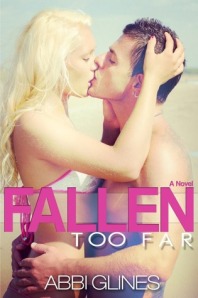 To want what you’re not supposed to have…

She is only nineteen.

She is his new stepfather’s daughter.

She is still naïve and innocent due to spending the last three years taking care of her sick mother.

But for twenty-four year old Rush Finlay, she is the only thing that has ever been off limits. His famous father’s guilt money, his mother’s desperation to win his love, and his charm are the three reasons he has never been told no.

Blaire Wynn left her small farmhouse in Alabama, after her mother passed away, to move in with her father and his new wife in their sprawling beach house along the Florida gulf coast. She isn’t prepared for the lifestyle change and she knows she’ll never fit into this world. Then there is her sexy stepbrother who her father leaves her with for the summer while he runs off to Paris with his wife. Rush is as spoiled as he is gorgeous. He is also getting under her skin. She knows he is anything but good for her and that he’ll never be faithful to anyone. He is jaded and has secrets Blaire knows she may never uncover but even knowing all of that…

Blaire just may have fallen too far.

Blaire has gone through some heartbreak throughout her 19 years. Losing her mother and sister and having her father walk out on them. When her mum dies, she’s forced to sell everything to pay the medical bills and now all that’s left is her truck, a twenty dollar note and her gun. The only living parent she has is her dad, whom she hasn’t seen in five years and now she has to go ask for him for help even though she’d rather not. But when she arrives at the address he’s given her, he’s not there and a full blown party is in its place.

Enter 24 year old Rush. He’s not happy she’s there and has given her a month to find a job and apartment and move out. As grateful as she is, this arrangement has now made her head spin and Rush has since changed his mind about this arrangement telling her she can now stay. But with Rush having a family secret, and his sister Nan, hating her for some apparent reason, Blaire wants to know what’s up, but when she does,  it changes everything!

Blaire was a great character to read. She hadn’t had much life experience since she looked after her sick mum for three years until her death and she has been through so much in her life, it was great to see her stay so strong and focus on what she wants to make something of herself in this lonely world without her mum and sister. She’s never really let anyone in, apart from her best friend Cain, but even then she had to let him go as he wanted more and she couldn’t give it to him. You do see her conflicted in her feelings for Rush. Since he was so harsh on her at times then so nice, it really did confuse her but her heart was still drawn to him, no matter how much she knew if something happened, it wouldn’t last as he is someone to just ‘fuck and dump.’ But she was so, so wrong…

I have to say…it did take me a while to warm up to Rush. The first time we meet him, I found him arrogant, egotistical and ignorant and of course, he was the son of a famous drummer so he had a lot of money to just throw around. That, of course, was down to what he knew about Blaire and her side of the family, so the only way he could act was being an absolute dickhead to her, but underneath his fucked-up ways, I did eventually warm up to him and find that deep down, he was such a lovely guy, but he was just being an asshole to Blaire because of Nan’s – his sister – secret, which no one thought to tell Blaire about until it was too late. I really felt for him at the end. It made my chest hurt when he was sobbing! YES sobbing to Blaire. For someone so closed off, his feelings were certainly brought to the service with Blaire, whom seemed to change is way of feeling. He wanted to be different with her, and he was, until the secret changed everything.

Grant. Oh what a lovely supporting character! I was drawn to him the instant he entered the scene with Blaire and he wanting to help her, unlike a certain brother of his at the start. He seemed like the type of guy who would be there for you, no matter what and would help you out. That’s something that I did like about him. He was willing to help Blaire out, no matter how weird it might have been within his family dynamic as there was a huge secret everyone was harbouring from Blaire.

The chemistry between Blaire and Rush was off the scale. The sexual tension between them sizzled at every turn and you could really see that they were so attracted to each other but Blaire was ‘innocent’ and Rush was a ‘fuck-up’ who thought she deserved more than him, but I was so glad that they both succumbed to their feelings, especially Rush, whose feelings you quickly saw rush to the service for Blaire. For someone who said he wasn’t a ‘kiss and cuddle’ person, he certainly felt that way with Blaire and it made the sex scenes that much more intense and emotional.

The story includes secrets, tragedies, jealousy, twists and heartbreaks. It truly is a book that needs to be read and that cliff-hanger at the end. Jesus! I cannot wait until March for the second book. I need to know what happens now.