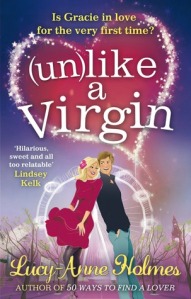 Is Gracie in love for the very first time? You know that bit in The X Factor, when the singer tells everyone about the rocky road they travelled to pursue their dream? Well, that’s Gracie Flowers’ story. Gracie is very focused for a woman of almost twenty-six. Her favourite book is ‘The 5-Year Plan: Making the Most of Your Life’. And her five-year plan is going very well. That is, until she is usurped from her big promotion by a handsome, posh idiot; she is dumped by her boyfriend; and discovers her loopy mother is facing bankruptcy. Hormones awry and ice cream over-ordered, a dream Gracie thought she’d buried ten years ago starts to resurface. A dream that reminds her of the girl she used to be and everything she wanted to become.

As you can see from the synopsis, Gracie Flowers relies on her favourite book “The 5-year Plan: Making the Most of Your Life.” And so far everything on her list is going well.

Gracie Flowers is an energetic estate agent, she has a boyfriend and is about to be promoted – that is until everything starts going wrong. Danny, her boyfriend, dumps her and leaves for a job in Canada, her promotion is given to ‘posh’ guy John, who isn’t even from the same store and she discovers her mother is facing bankruptcy.

10 years ago, Gracie’s father died and she idolised him. He got her into music and took her to singing competitions – he was her biggest supporter, but when he died, her mother took her to one competition and she completely lost it on stage, screaming the place down.

So it’s safe to say, she’s given up her dreams of being a singer to become an estate agent instead.

She visits her Dad’s grave weekly, her mother having never been to it and feels safer saying locked in doors, hence her becoming bankrupt. At the grave, she befriends an old pair of siblings and they meet every week at the graves.

The graves become a big part of the story, which I don’t want to spoil, but I was totally on Gracie’s side when everything was happening.

The characters were written fantastically. I enjoyed the friendship between Gracie and the siblings – they were there for her and vice versa and you could see she really cared for the brother and sister, especially throughout the grave story, where her temper for her mother and the men involved flared and she had to stop whatever was happening, not just for her, but for the sibling. It was lovely to read about them.

The end of the book was a great way to end it. Does Gracie finally pursue her dream? Or does she panic under the pressure? You’ll have to read and see.