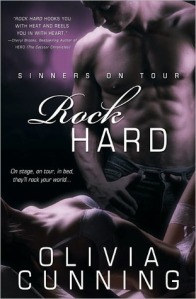 An ultimatum can break your heart….

Every night lead singer, Sed Lionheart whips thousands of women into a frenzy with his voice alone. But the stage is the only place Sed feels any passion since he lost Jessica…

If you’re not willing to break all the rules…

It shattered her heart, but law student Jessica broke off her engagement to Sed, determined to be successful on her own terms. But no other man can ever hold a candle to Sed…

Then a chance meeting and tortuously close quarters lead to uncontrollable flares of passion and rediscovery of their unique penchant for public encounters. Now, in addition to the risk of mutual heartbreak every time they get together, they’re in danger of truly scandalous public exposure..

I have to be honest, I didn’t really get in to Sed’s story as much as Backstage Pass, but that doesn’t mean I didn’t enjoy getting to understand Sed more, as you find out a bit about his personal life in the first book with Jessica.

From the synopsis, you kind of have a back story about their relationship – Jessica and Sed were engaged, but she broke it off because Sed didn;t want her going to Law school. The rest of the band despise her for breaking his heart.

Due to some unforeseen circumstances including the band and Jessica on Brian’s Stag night, Jessica ends up working for Myra and her project, meaning her and Sed have to spend a lot of time together and of course, if you’ve read the first book, its inevitable that Sed and Jessica become fuck buddies as such, Jessica wanting to use him and Sed wanting her back.

The sex scenes were really steamy, and I loved the public sex scenes, especially the one at the top of the Eiffel Tower in Las Vegas.
The ending is sweet, with the band forgiving Jessica and helping Sed plan out how to get a ring back on Jessica’s finger, but Jessica has other ideas. You’ll have to read it to find out what happens.

I did panic at one part of the book where Trey is rushed into hospital due to what happens earlier in the book – which i wont spoil for you, but all is good throughout the book with him. If you read my review on Backstage Pass, you can see I have a soft spot for Trey.

Anyway, as much as this wasn’t my favourite book, its a good way to understand Sed and why he is why he is from the first book.

The third book is called Double Time, which now tells the story of Trey which should be out sometime this week – which i cant wait for.